Review: 'The Original Folk and Fairy Tales of the Brothers Grimm' by the Grimm Brothers, Jack Zipes 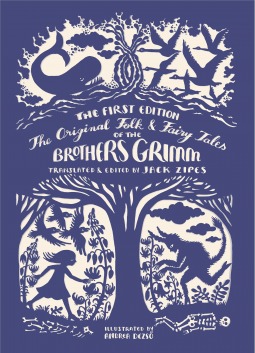 I adore fairy tales. They were the first stories I ever really read to myself from a thick volume with hardly any drawings. It made me feel very grown-up. Knowing fairy tales really helps in discovering underlying themes in most other works of literature, however, over time it's easy to lose track of the actual fairy tales themselves, which is why I really enjoyed this collection.

When Jacob and Wilhelm Grimm published their Children's and Household Tales in 1812, followed by a second volume in 1815, they had no idea that such stories as "Rapunzel," "Hansel and Gretel," and "Cinderella" would become the most celebrated in the world. Yet few people today are familiar with the majority of tales from the two early volumes, since in the next four decades the Grimms would publish six other editions, each extensively revised in content and style. For the very first time, The Original Folk and Fairy Tales of the Brothers Grimm makes available in English all 156 stories from the 1812 and 1815 editions. These narrative gems, newly translated and brought together in one beautiful book, are accompanied by sumptuous new illustrations from award-winning artist Andrea Dezsö.

From "The Frog King" to "The Golden Key," wondrous worlds unfold--heroes and heroines are rewarded, weaker animals triumph over the strong, and simple bumpkins prove themselves not so simple after all. Esteemed fairy tale scholar Jack Zipes offers accessible translations that retain the spare description and engaging storytelling style of the originals. Indeed, this is what makes the tales from the 1812 and 1815 editions unique--they reflect diverse voices, rooted in oral traditions, that are absent from the Grimms' later, more embellished collections of tales. Zipes's introduction gives important historical context, and the book includes the Grimms' prefaces and notes.

A delight to read, The Original Folk and Fairy Tales of the Brothers Grimm presents these peerless stories to a whole new generation of readers.

Being half-German and having the good fortune of having a grand-father who loved telling tales, I grew up with all the fairy tales there were. As a child I preferred Hans Christian Andersen's fairy tales over those of the Grimm Brothers, but this collection really made me appreciate them anew. I always felt like they had too strong a moral but the introduction to this collection made it clear how strongly the Grimm Brothers edited the fairy tales in the later editions. Jack Zipes reproduces the original fairy tales from the first edition and they are a real joy to read. Zipes translates these stories very well and captures the tone perfectly. The rather blunt punishment of those that are wicked and the extravagant reward of those who are good are almost humorous and the moral is not quite as obvious in all of them.

This collection is absolutely bursting with stories. It was an amazing experience to be brought back to my childhood, where there was always a next story, there was always more. So although this collection would be great for children, it also has a lot to offer to adults. Apart from the story-telling aspect to fairytales and folk tales, it is also really interesting to look at the similarities and differences between the stories. They can tell you a lot about Northern European culture and this aspect is really brought out by Zipes in his introduction. The Grimm Brothers were originally philologists and sociologists and they collected stories for the purpose of exploring what they shared. Seeing that the morality lessons were added later on, mostly, really allows you to

The fact that these are the original stories rather than the edited is important because this is the first time they have been translated. Where people are used to Disney-esque fairy tales in which princes rescue princesses, these stories are actually very different. Did you know there was a fairy tale about the Virgin Mary which starts out very Bluebeard-ish. Who'd have guessed! Similarly I was very happily surprised by the role of women in these stories. The traditional image of women in fairy tales is quite bad, painting them as passive and simply as prices. However, these original fairy tales show daughters protecting their fathers from the Devil, sisters saving their brothers (again and again) and girls saving their lovers. Naturally we also have it the other way round but that is equality for you. Sure, there are also fathers and men who command their daughters around, but there atr women who do the same. Fairy tales allow for women to be maids, daughters, sisters, mothers, wives, queens, princesses and murderers. I am really happy that these versions of the stories are now translated and will soon be available because every nursery needs one. Maybe save the more gruesome stories for later on.

This collection of Original Fairy Tales is one I would love to read to my future children. There are short and long stories, ones about knights and farmers, men and women, children and adults. Although reading should be educative, these fairy tales aren't submersed in moral but are allowed to be fun and interesting. Not only suitable for children, even adults will love sinking into the world of magic and wishes that come true again.