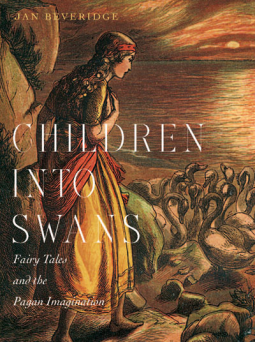 I am a massive fairy tale fan. Fairy tale books were what I read throughout most of my childhood. When I was a child, we had a collection of fairy tale books from all across the world, African, Native American, European, Jewish, Asian, everything.


Fairy tales are alive with the supernatural - elves, dwarfs, fairies, giants, and trolls, as well as witches with magic wands and sorcerers who cast spells and enchantments.

Children into Swans examines these motifs in a range of ancient stories.Moving from the rich period of nineteenth-century fairy tales back as far as the earliest folk literature of northern Europe, Jan Beveridge shows how long these supernatural features have been a part of storytelling, with ancient tales, many from Celtic and Norse mythology, that offer glimpses into a remote era and a pre-Christian sensibility. The earliest stories often show significant differences from what we might expect. Elves mingle with Norse gods, dwarfs belong to a proud clan of magician-smiths, and fairies are shape-shifters emerging from the hills and the sea mist. In story traditions with roots in a pre-Christian imagination, an invisible other world exists alongside our own.

From the lost cultures of a thousand years ago, Children into Swyans opens the door on some of the most extraordinary worlds ever portrayed in literature - worlds that are both starkly beautiful and full of horrors.


I really enjoyed reading this book. Fairy tales and folk tales are something that are intrinsic to pretty much every culture around the world. I really enjoyed how Beveridge brought together stories and traditions from every corner of Northern Europe, showing the threads that run throughout Teutonic mythology and Germanic culture and which bind together different events, peoples and festivals. This book has a very strong focus on Northern Europe. Personally, I found this very interesting since my own roots and interest lie there as well. I recognized most of the themes and fairy mentioned and where I didn't I found that Beveridge's ideas really informed my own already informed thoughts. However, at times I really wished that she would have expanded the scope of her research to include the Near and Far East. The cultures found there have some fascinating fairy and folk tales themselves and I would've loved to have seen how these related to those found in the West. However, I appreciate that an academic project needs to have boundaries.

Beveridge doesn't get too stuck in academics. Although the book is incredibly well-researched, the Bibliography was one of my favourite parts of the book, she doesn't alienate her readers with difficult terms or extended arguments, but rather brings her ideas about fairytales very close to the reader. Although personally I would have enjoyed a thorough analysis of the core themes of folk tales, this simply isn't that kind of book and Beveridge never set out to write that book either. Something I really enjoyed was the inclusion of a specific story here and there, which helped Beveridge explain her argument but also helped remind the reader what lies at the core of Children into Swans and that is the tales themselves.

I've stated repeatedly above that I would have liked some more "depth" and I think that requires some explanation. Beveridge does amazingly at showing the similarities between folk tales from different countries yet never goes quite far enough to really analyze them. This means that upon finishing each chapter the reader is left looking for answers to questions that naturally pop up while reading this book. As such, I consider Children into Swans a great starting point if you are interested in learning more about folk tales. It gives you an introduction to the general ideas about folklore traditions and ist references and bibliography will give you plenty more reading material.

I really enjoyed reading Children Into Swans. Beveridge has done a lot of research which shows in the book and really makes it an informative read, even if you are already knowledgable about Folklore. If you are looking for in-depth and academic analysis then this is not the book for you, although I would still recommend giving it a try!
Posted by Juli Rahel at 8/23/2014 05:13:00 pm