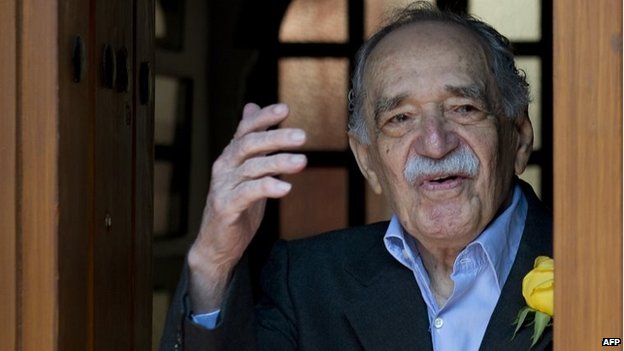 I usually don't do these kinds of posts because I either don't know the authors well enough or there doesn't seem to be time etc. But Gabriel Garcia Marquez was the kind of author whose name has become an institution in its own right and whose novels are made into movies and considered classics. I personally still haven't read anything by Marquez, but some of his books are in my parents' respective bookcases. So not that he has died, I feel like I really need to start reading his books.


His novels are key examples of the beauty that is Spanish magical realism. They somehow did it unlike any others and I think we still see that today in Guillermo del Toro's movies and Carlos Ruiz Zafon's novels, and many other examples.

Some of Marquez' novels are:

One Hundred Years of Solitude

Love and lust, war and revolution, riches and poverty, youth and senility -- the variety of life, the endlessness of death, the search for peace and truth -- these universal themes dominate the novel. Whether he is describing an affair of passion or the voracity of capitalism and the corruption of government, Gabriel Garcia Marquez always writes with the simplicity, ease, and purity that are the mark of a master.

Love in the Time of Cholera


In their youth, Florentino Ariza and Fermina Daza fall passionately in love. When Fermina eventually chooses to marry a wealthy, well-born doctor, Florentino is devastated, but he is a romantic. As he rises in his business career he whiles away the years in 622 affairs--yet he reserves his heart for Fermina. Her husband dies at last, and Florentino purposefully attends the funeral. Fifty years, nine months, and four days after he first declared his love for Fermina, he will do so again.


Of Love and Other Demons

On her twelfth birthday, Sierva Maria, the only child of a decaying noble family in an eighteenth-century South American seaport, is bitten by a rabid dog. Believed to be possessed, she is brought to a convent for observation. And into her cell stumbles Father Cayetano Delaura, who has already dreamed about a girl with hair trailing after her like a bridal train. As he tends to her with holy water and sacramental oils, Delaura feels something shocking begin to occur. He has fallen in love, and it is not long until Sierva Maria joins him in his fevered misery. Unsettling and indelible, Of Love and Other Demons is an evocative, majestic tale of the most universal experiences known to woman and man.


Memories of My Melancholy Whores

The girl is 14 and works all day in a factory attaching buttons in order to provide for her family. Rosa gives her a combination of bromide and valerian to drink to calm her nerves, and when the prospective lover arrives, she is sound asleep. Now the story really begins. The nonagenarian is not a sex-starved adventurer; he is a tender voyeur. Throughout his 90th year, he continues to meet the girl and watch her sleep. He says, "This was something new for me. I was ignorant of the arts of seduction and had always chosen my brides for a night at random, more for their price than their charms, and we had made love without love, half-dressed most of the time and always in the dark, so we could imagine ourselves as better than we were ... That night I discovered the improbably pleasure of contemplating the body of a sleeping woman without the urgencies of desire or the obstacles of modesty.

Chronicles of a Death Foretold

A man returns to the town where a baffling murder took place 27 years earlier, determined to get to the bottom of the story. Just hours after marrying the beautiful Angela Vicario, everyone agrees, Bayardo San Roman returned his bride in disgrace to her parents. Her distraught family forced her to name her first lover; and her twin brothers announced their intention to murder Santiago Nasar for dishonoring their sister.

Yet if everyone knew the murder was going to happen, why did no one intervene to stop it? The more that is learned, the less is understood, and as the story races to its inexplicable conclusion, an entire society--not just a pair of murderers—is put on trial


Rest in peace, Gabriel Garcí­a Márquez, your work has been and will be a treasure.