This is the first time I'm "attempting" this meme. First Chapter First Paragraph Tuesday Intros is hosted by Diane over at Bibliophile By the Sea, where each week she shares the first paragraph (or a few) of  book she is reading or wants to read. I thought it looked like a lot of fun, so here I am, trying it out. Hop over to Bibliophile By the Sea if you want to join, which you know you do!


At the moment I'm reading The Wish by D.S. Affleck, which I'm really enjoying. Here are the first couple of paragraphs of the prologue. 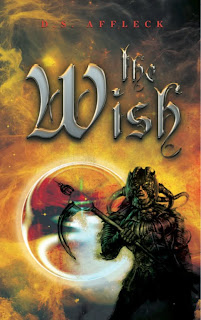 'In the beginning...
Acrid smoke billowed from the valley floor as a multitude of fires began to extinguish under grey skies and incessant drizzle. The remains of the town smouldered after the successful attack and nothing remained standing.A figure, clad from head to foot in black armour, his face hidden by shadow, stood high above a rocky outcrop watching with satisfaction as the prisoners were led away in chains. In his hand he held an orb which glowed fiercely, emitting an energy which seemed to envelop him. Behind him stood a young figure, close to adulthood, observing everything and learning.A frown crossed his face, as he thought about the attack. What should have been a relatively easy foray into enemy territory had nearly turned into a disaster and it had been his fault. He was distracted about something else entirely and his mind hadn't been on the attack. He hoped that his men hadn't seen his lack of enthusiasm as a sign of weakness. He'd have to watch out for some of his more ambitious lieutenants, this was just the sort of opportunity they craved.He had been disturbed of late by peculiar dreams of the future. Dreams of a time he had no connection with, but somehow felt a part of. Dreams of a boy living in a strangle and and a different time. He had connected with this boy and it had something to do with the object he held in his hand. he knew that soon he'd be making a bargain that could change his life forever.
The glass sphere he held seemed alive. Wisps of smoke swirled inside of it and sparks crackled from his fingers. He turned it over in his hand thoughtfully. It had given him great power, but for the first time in a long while all this pillaging and mayhem just wasn't as satisfying as it used to be.' p.4

I love the phrasing in these paragraphs. There are so many questions that I want to ask and at the same time I feel like I'm entranced by the imagery and the main character. But mainly, I really want to know more about this sphere or orb, I mean, it sounds absolutely fascinating!

Teaser Tuesday is hosted by MizB over at Should Be Reading and I'm also using The Wish by D.S. Affleck for this meme!


"What was it the warrior said?" She paused recalling Jamie's conversation with her the other day. "Oh yes. You'll see it in your eyes." She popped on her glasses and peered intently into Jamie's eyes.' p.61

See what in his eyes? And is this mysterious warrior the same as in the intro above?