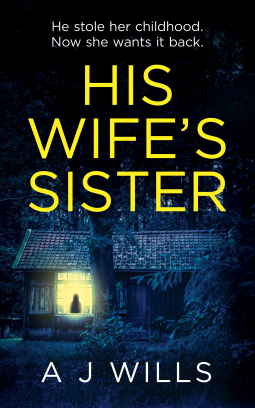 Sometimes you have to reach for a psychological thriller and spend a frantic few hours chasing down the path of madness for truth. At least, that's what I tell myself. Last weekend, I found myself in the need for some quick escape and reached for A.J. Wills' His Wife's Sister, which did the job quite admirably. Thank you to Cherry Tree Publishing and NetGalley for providing me with a copy of this book in exchange for an honest review.
Pub. Date: 5/7/2020
Publisher: Cherry Tree Publishing

He stole her childhood. Now she wants it back.

A woman is found alone and confused wandering through remote woodland.

She claims to be Mara Sitwell, the little girl who mysteriously vanished from her home nineteen years ago.

She says she was abducted and has been held captive in an underground cell.

But not everyone’s convinced she’s telling the truth.

Her brother-in-law, Damian, thinks she’s hiding a dark secret and so psychologically scarred she’s a danger to his young family.

But no one’s listening to him.

His only choice is to prove what really happened to Mara.

But the truth is never easy to uncover, especially when it’s been buried so deep...

What do you say when your little sister disappears from the tent you're sharing in your backyard and isn't heard from again? What next when you feel like the outsider at school and a boy who's never spoken to you before offers to be your friend? And what do you do when your little sister suddenly reappears after 19 years? Now let's switch that around. What do you do when a little girl disappears from your town and her lonely sister is in need of friendship? What do you do when you fall in love with her? And how do you feel when her sister suddenly reappears and becomes central to your now-wife's life? Let's bring in a final viewpoint. What do you do when you're kidnapped as a child and never see anyone but your kidnapper for 19 years? How do you feel to see your sister has created a life for herself? How do you answer questions you don't even want to ask yourself? His Wife's Sister tries to engage with all these viewpoints in one way or another, and as you can perhaps tell from the jumble above, that's not exactly easily done. However, A.J. Wills'
Lucia and Damien are married with two lovely children. He works from home while she commutes into London for work. They seem pretty perfect, until they receive a call from the police that Lucia's sister, Mara, has been found after being abducted 19 years ago. Everything freezes to a halt as they try to help her adjust and let her move in with them. It is then that the real oddness begins, however, as Damien, our main narrator, starts to see gaps in Mara's behaviour and explanations. It is about a third through His Wife's Sister's first chapter that you begin to get an odd feeling about everyone involved. We spend most of the book inside Damien's head as he moves back and forth between telling us what is happening now and how he and Lucia met. Without getting into spoiler territory, most readers will grasp pretty quickly that he is an incredibly unreliable narrator. A lot of His Wife's Sister feels predictable, in that A.J. Wills sets up the dominoes in plain view and knocks them over perfunctorily. None of the characters are really likeable and sometimes slips into the weird territory of blaming a kidnapping and assault victim for their coping and survival tactics. Although I was engrossed by His Wife's Sister this was largely due to the creepy nature of the book and the fact I had to be certain A.J. Wills would bring it back around to kind of ok territory.
This is my first novel by A.J. Wills and I'm still quite torn about the reading experience. On the one hand I found some aspects of His Wife's Sister to be rather off and a lot of the twists and turns are quite clear from the start. On the other hand some moments in His Wife's Sister happen so rapidly that I was confounded and fascinated by them. Quite frequently I'd wonder, how did we get here? Why is no one concerned about this? How could this just happen? The characters didn't feel real in the sense that I truly wondered at their interior motives and if they had any. It was a shame not to have Lucia be narrator or protagonist for part of the story, as that would have grounded both Mara and Damien more and prevented it from feeling as cliche. Now, I know that the above doesn't sound very positive. It is why my reading experience was such a confusing one. Despite the above, I did enjoy parts of His Wife's Sister and found myself unwilling to put it down. But I don't know if I'll be quick to pick up Wills' next one
I give this book...

3 Universes.
His Wife's Sister is a fast, gripping and frustrating read. The plot as well as the tone felt off, occasionally, and the characters weren't always believable. The reason I'm giving 3 Universes rather than 2 is because despite all this, I was hooked.
Posted by Juli Rahel at 6/11/2020 06:44:00 am