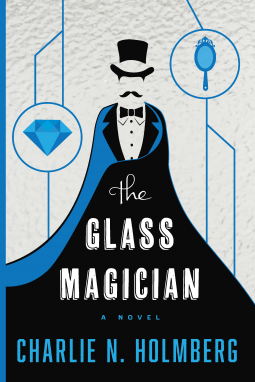 I read The Glass Magician almost directly after The Paper Magician, having wasted a good few years wondering when I would get to them. I adored the first novel in the series despite a few hesitations and found myself with a few more hangups after The Glass Magician. Thanks to 47North and NetGalley for providing me with a copy of this book in exchange for an honest review.
Pub. Date: 11/4/2014
Publisher: 47North

Now well into her apprenticeship with magician Emery Thane, twenty-year-old Ceony Twill is continuing to discover the joy of paper magic. She adores bringing her spells to life in surprising ways, from learning the power of distortion to creating a beloved paper dog. And she secretly hopes that the romance she foresaw blossoming between her and the peculiar yet strikingly handsome Emery finally becomes real.

But when one magician with a penchant for deadly scheming believes that Ceony possesses a secret, he vows to discover it…even if it tears apart the very fabric of their magical world. After a series of attacks target Ceony, and catch those she holds most dear in the crossfire, she knows she must find the true limits of her powers…and keep her knowledge from falling into wicked hands.

The delightful sequel to Charlie N. Holmberg’s The Paper Magician, The Glass Magician will charm listeners young and old alike.

Sequels are hard. You have to follow up a great start with something that has to be similar but also new, recognizable and yet a clear improvement, something more mature and grander without betraying the first. Some books are clearly laid out to be a series and have an arc spanning across multiple books while each is contained within itself. Others seem a standalone but are then turned into series when they do well. I'm not quite sure where The Paper Magician Series falls, but The Glass Magician definitely tries to up the ante. Everything feels a little intenser, which means we inevitably lose some of the aspects of the first book that made it such a comforting read. There is more action, more drama, more characters and more locations but I'm still undecided whether this adds up to the book actually achieving more. A few of my issues with the first book arose again, which I'll go into more detail on below, and were strengthened rather than laid to rest.
I soon realized what the cause was behind my sense of unease and that it started very early on. This is where we enter spoiler territory for the rest of this paragraph so if you didn't get around to these in the last 6 years either, turn away now. The Glass Magician has two villains, one of whom has the major starring role and the other who is more of a very evil side-kick. We meet the latter early on when, after the first attack on her life, Ceony spots a foreign-looking man in the crowd. She chides herself for thinking of him as the potential perpetrator only because he is different, but is proven right by the narrative. He is not just evil though, he is almost animalistic and without any redeeming factors or actual personality traits aside from his foreignness. It is a weird turn for Holmberg to take and left a bad taste in my mouth. In my review of The Paper Magician I noted that although I enjoyed the romance aspect of the novel, I was skeptical about the master-apprentice relationship between Thane and Ceony. This skepticism only strengthened while reading The Glass Magician. (Again, spoilers.) He is a good bit older than her and has a failed marriage under his belt. He is privy to much more information than Ceony, meaning she makes rash decisions she is then told off for by both Thane and others. The power balance is completely off. And on top of that, Holmberg actually has Ceony's previous teacher openly disapprove of the developing feelings between the two as it is against the master-apprentice rules. Although the forbidden aspect is surely exciting, it is also wrong in the context of their relationship. nd let's not forget about Ceony thinking another middle-aged man is in need of a wife since he can't keep his own house clean or himself fed. Surely I'm not the only one thinking that even 2014 was a bit too modern for those ideas.
Although I continued to enjoy Holmberg's writing, the issues laid out above made me a bit hesitant. Ceony continues to be an interesting character, who wants to take responsibility for the problems she thinks she has created. However, as she is shut out of any important meetings, she often ends up making the wrong choices. It makes sense for the second book in the series to maybe be something of a breaking point for her, where she has to fail, reassess, grow and come out stronger, but the plot moved a little too fast to allow for this. Thane remains a bit of a mystery, which is less fun now than in The Paper Magician. Some of the other side characters are hardly developed beyond what they need to be for the plot, which is a shame. As you can tell, I am torn. I did enjoy reading The Glass Magician but couldn't help but wince here or there. Whether this is down to Holmberg or an editor, I'm not sure. I will give the series' next book a go, mainly because I prefer to finish series, but I will go into it more hesitantly than I did The Glass Magician.
I give this novel...