Review: 'The Glamourist' (The Vine Witch #2) by Luanne G. Smith 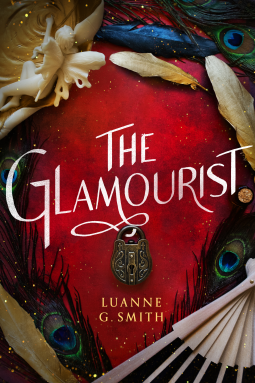 I think in some ways I have Luanne G. Smith to thank for getting me out of my COVID-19-related reading slump. I raced through the series first book, The Vine Witch, in pretty much a day earlier this month, after putting off reading it for months. I decided not to make the same mistake with The Glamourist and was rewarded for my growth. Thanks to 47North and NetGalley for providing me with a copy of this book in exchange for an honest review.
Pub. Date: 6/9/2020
Publisher: 47North

A spellbinding novel of bloodlines, self-discovery, and redemption by the author of the Washington Post bestseller The Vine Witch.

Abandoned as a child in turn-of-the-century Paris, Yvette Lenoir has longed to uncover the secrets of her magical heritage and tap her suppressed powers. But what brave and resourceful Yvette has done to survive the streets has made her a fugitive. With a price on her head, she clings to a memento from her past—what she believes to be a grimoire inherited from the mother she never knew. To unlock the secrets of her past, Yvette trusts in one woman to help solve the arcane riddles among its charmed pages.

Elena Boureanu is the vine witch of Château Renard, noted for its renowned wines. Even as she struggles with her own bloodline—and its poisonous threat to her future—Elena can’t ignore a friend on the run. Joined by a cunning thief, the proprietor of an enchanted-curio shop, and a bewitching black cat, Elena and Yvette are determined to decode Yvette’s mysterious keepsake. But what restless magic will be unleashed? And what are Yvette and Elena willing to risk to become the witches they were destined to be?

There are a good few staples anyone who wants to write about magic and witches can take advantage of. In The Vine Witch Luanne G. Smith began her world-building with some of these, such as the master-apprentice relationship, strong connections to the natural world, and ancient tomes of spells and hexes. She builds on this in The Glamourist, but by recasting them into something new and surprising. There is a black cat, a shop of curiosities, and a young thief, but none of these are exactly what we expect them to be. There are also two overarching themes which I found very interesting: the question of whether our blood and ancestry defines us and the underlying distrust between those with and without magic. The latter is more subtle but frequently addressed, especially in Elena's narrative, and I hope more attention is payed towards it in the third book.
As its title might suggest, this book is a little more lyrical and has a little bit more glam. We have moved from the earthy vineyards to the glamorous Paris. In my review for The Vine Witch I noted how some of the side characters' story lines had been left open for continuation, and The Glamourist picked up right where they were left off. Yvette is, in many ways the star of The Glamourist, as she tries to unravel her own history and come into her power. However, this is mirrored by Elena's journey, as she tries to decide between her life as a Vine Witch and her birthright as a venefica, a witch of poisons. Do we get to decide who we are or is it all in our blood? Will blood out? Both Yvette and Elena will find out, with plenty of hijinks along the way that take them to Paris' fanciest restaurants and its darkest depths.
I raved about Smith in my first review and I'm just here to do a little bit more of it. The whole Vine Witch series so far has been incredibly comforting. There is danger, prejudice and hurt in her books and many of her characters struggle, but Smith also infuses every page with warmth and magic. It is not a perfect world, but it is a world in which many people work towards the better, where they help each other and happy endings are possible. Yvette is fleshed out a lot more in The Glamourist and I really found myself warming to her almost from the start. There are a few major reveals about her heritage and power and although I saw the major ones coming, this was largely due to my being deeply steeped in folklore. Despite predicting it, I really enjoyed how everything came together in the last few chapters. Reading The Glamourist left me feeling warm and eager for more.
I give this novel...

4 Universes!
I adored The Glamourist and found myself trying to put off finishing it, even though it was impossible. The Vine Witch series has great world-building and beautiful characters. I think this is the comfort read we all deserve right now.
Labels: 47North Luanne G. Smith Magic netGalley Review The Glamourist The Vine Witch