Secret procedures? The desire to live again? The rich indiscriminately taking advantage of the poor? I'm listening! Jane Rogers had me hooked pretty quickly once I read the blurb for Body Tourists. Science Fiction is one of my favourite genres, and there have been some great experimental SciFi novels lately, such as Frankissstein by Jeanette Winterson for example. Body Tourists joins that rank, although it isn't quite as solid as the former. Thanks to Hodder & Stoughton and NetGalley for providing me with a copy of this book in exchange for an honest review. 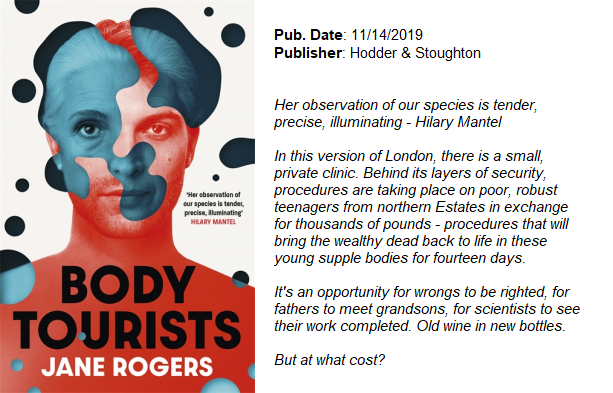 I have always thought of Science Fiction as one of the key genres that is able to predict and discuss where we might be going. Science and progress have become elemental to our society. If we aren't moving forward, then what are we doing? This in and of itself leads to progress for progress' sake, where the question isn't 'should we' but 'when will we'. It is these type of questions that lie at the foundation of a classic like Mary Shelley's Frankenstein. Just because Frankenstein has the ability to create life, should he have? Both author and Creature seem to decidedly suggest no, but the fascination is there regardless for the reader. We know it isn't right, that Frankenstein was cruel, and yet we can't help but be in awe of what he achieved. Similarly, H.G. Well's Dr. Moreau is probably certifiably insane and yet there is something that won't let you look away. It is this moral grey area, that contrasts humanity's curiosity with its morality, that elevates Science Fiction for me. Who knows how any of us would act, what choices we would make, if we found ourselves in similar situations, with similar options. If you could, wouldn't you bring your loved ones back?
In Body Tourists we meet an array of characters, all, in some way, involved with the workings of a small clinic that is quietly bringing the wealthy dead back to life for fourteen days, using the bodies of "willing volunteers". Now, I won't go into why those quotation marks are there, but it does hint at one of the interesting themes brought up by Rogers' novel, which is bodily autonomy and how much of your character and personality is decided by your body. Can you sign away your body while your mind rests and not be affected? How different would you be if you were in a different body? It is clearer now than ever that the colour of your skin vastly affects what kind of life you can lead. I was intrigued by the way Rogers worked with the idea that body and soul are separate and yet deeply tied together. Other themes addressed in Body Tourists are the gap between rich and poor, the effects of virtual reality and constant access to screens, and the endless desire to once again meet our departed loved ones. It is the second, the presence of screens and AI everywhere, that balances dangerously between being a little cliche and having meaning.
This is my first novel by Rogers and I really enjoyed her ability to create characters. Body Tourists is low on the science, which is understandable since, like Frankenstein, the science at the heart of the novel does not actually exist. As such, it mostly focuses on the varying experiences of the different volunteers and revived dead. I really enjoyed the back and forth between these different characters, many of which we see reappear in other narratives later on. Body Tourists is told chronologically, but since much of the emotional weight of the book is with characters you might never revisit, it can slow down the reading for you. Body Tourists dorsn't feel quite as groundbreaking as I was expecting, going in. The concept isn't super new, and neither is the idea that screen time may be bad for you. When something like Black Mirror exists, that purposefully pushes the technology we have to the brink, then it is worth for novels to work on a similar level, revealing deeper truths about our own ideas and practices. What "saves" the novel from feeling outdated, for me, was the sheer humanity of most of Jane Rogers' characters. You can connect quite deeply to some of them, which means that Body Tourists has been on my mind every since I finished it. The reader's connection to the characters is what will let the themes suggested by Rogers percolate and develop.
I give Body Tourists...

3 Universes.
Body Tourists will leave you with many questions about the nature of life and what you would be willing to do for it. Rogers is a captivating writer who elevates these questions.
Posted by Juli Rahel at 6/05/2020 02:23:00 am