Review: 'A History of Virility', ed. by Corbin, Courtine and Vigarello 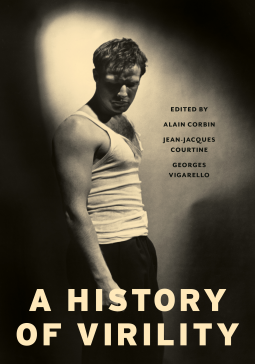 In my studies I have focused very explicitly on gender, whether it was in English literature over all or specifically in medieval English literature. I find the way gender is represented, advocated or repressed very interesting, and part of that is the way in which we have translated gender patterns from previous centuries to our own. Part of the fact I could follow my interest is because of the path early feminist scholars have built for me. Their early forays into what "feminity" means were incredibly important and have established Gender Studies as its own independent field. However, a similar focus on "masculinity" has only slowly developed so when I saw A History of Virility on Netgalley I knew I wanted and had to read it. Thanks to Columbia University Press and Netgalley for providing me with a copy of this book in exchange for an honest review.

In these original essays, an international group of scholars, including Claude Thomasset, Jean-Paul Bertaud, and Andrè Rauch, follow the socio-historical evolution of virility, as opposed to masculinity, to unsettle popular accounts of politics and culture. The book begins with ancient conceptions of the male gender, which persisted, with significant alterations, for centuries. Virility foundered during the Enlightenment, and then declined in the nineteenth century. Born out of defensiveness, twentieth-century conceptions of maleness embody a "virility on edge," which, when considered in relation to events, adds fascinating depth to our understanding of history.

A major contribution to the nascent field of masculinity studies, this history consults painting, sculpture, literature, philosophy, film, and cultural and sociological critique. It involves fascism, nationalism, liberalism, classicism, colonialism, and war. With the twentieth century delivering one blow after another to hegemonic virility, this book also explores where manliness might be headed next.

Alain Corbin is a French historian and specialist of nineteenth-century France. His publications include Women for Hire: Prostitution and Sexuality in France After 1850; The Foul and the Fragrant: Odor and the French Social Imagination; Village Bells; and The Life of an Unknown.Jean-Jacques Courtine is professor of anthropology at the Sorbonne nouvelle (Paris III) and professor emeritus at the University of California, Santa Barbara. With Georges Vigarello, he edited Histoire du corps (History of the Body) and Histoire du visage (History of the Face).Georges Vigarello is one of Europe’s best-known historians of the body. He has published prolifically on topics ranging from Concepts of Cleanliness and the cultural history of sports to The History of Rape and The History of the Body. Vigarello is research director at the École des hautes études en sciences sociales (EHESS), and he is the author, most recently, of The Metamorphoses of Fat: A History of Obesity.

To start with it has to be acknowledged that the contributors to this academic collection are absolutely stellar. Not only do they stretch across different disciplines, together they also manage to interrogate every moment of relevant human history. As such, the book does exactly what its title promises which is quite a feat for an academic book. A History of Virility actually does cover the history of the concepts of virility and masculinity, the way in which these ideas and concepts were represented in the arts and how they developed over time. What is also interesting is how this collection of chapters interacts with some of the academic theories who are dominant in the field of Gender Studies at the moment. One of the crucial ones, a theory taught to every English lit undergraduate, is Judith Butler's ideas about gender performativity. Basically this theory means that gender isn't something set and intrinsic, but rather that what we consider 'masculine' and 'feminine' are a set of behaviours which we perform. And this covers everything from clothes, to ways of walking and talking etc. Until now I've only really seen this theory applied to femininity, so it was interesting to see it applied to masculinity and virility for once.

A History of Virility does truly cover pretty much everything. Not only are the standard time periods discussed, i.e. the Greeks, the Romans, the Barbarians, but also how during the Enlightenment virility became an issue, how the military plays a role in the maintaining of virility, homosexuality and virility, and the link between muscles and "manliness". This broad range is mainly due to the broad range of specialists brought in and, for those interested, it makes this volume very useful. However, it also means that A History of Virility is absolutely gigantic as a hardback. Counting in at more than 700 pages, including colour-plates, 'tome' would be the best word to describe it. Although it is great to have all the research in one book, it doesn't necessarily make it very accessible. However, it does have to be said that not all of it has to be read in order. Picking and choosing between chapters is perfectly possible and, depending on your interest, also a lot more rewarding.

With a book like this it can be hard to truly know what to say. Academic books aren't, and shouldn't be, "readable" in the way that fiction books are, or should be. The point of them is that you have to struggle with the concepts they're trying to elucidate for you, whereas fiction books shouldn't be making you reread the same page five times. My copy of A History of Virility has, by now, been scribbled full with notes and thoughts, which might seem criminal to some but is how I best learn. The book is incredibly well-researches and the difference between writing styles means that each chapter feels new and refreshing. Since it is an academic read there is use of jargon etc. which can cause some confusion, but it's not the kind of book that makes it difficult for you to follow the arguments.

Perhaps most interesting to readers who are not as interested in the Classical periods are the chapters on more recent history, such as 'Fascist Virility' by Johann Chapoutot. Masculinity and virility have been used, especially in Nazi Germany, as a way of incite a population. During the Second World War, Italian and German fascism were built upon the concept of virility, which went hand in hand with a complete devaluation of women apart from being mothers and wives. Virility, then, became everything femininity was not. To see recent history in such a different way is interesting, especially if you then look at the way in which we currently seems to be returning to some of the thought patterns from before. It is important to be aware not only of how gender plays a role in societal developments, but also how gender is only one of the many things playing in such major upheavals.