Friday Memes and 'Beauty is a Wound' by Eka Kurniawan 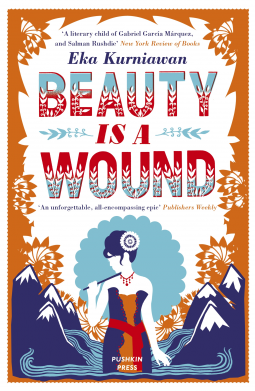 This Friday I'm sharing a novel I started reading earlier this week and I am really, truly enjoying it. I'm talking about Beauty is a Wound by Eka Kurniawan. I knew I wanted to read it the moment I read the blurb. So now I'm sharing some bits with you in the hope to make you equally as fascinated with Beauty is a Wound. Thanks to Netgalley and Pushking Press for providing me with a copy of this book.

One stormswept afternoon, after twenty-one years of being dead, the beautiful Indonesian prostitute Dewi Ayu rises from her grave to avenge a curse placed on her family. Amidst the orange groves and starfruit trees, her children and grandchildren have been living out lives of violence, incest, murder, madness and heartbreak. They are creatures of breathtaking beauty - all but one of them, whose ugliness is unparalleled. And Beauty is her name.

Set in the mythical Indonesian town of Halimunda, Beauty is a Wound is a bawdy, epic tale of fearsome women and weak-willed men, communist ghosts and vengeful spirits, chaste princesses and ruthless bandits. It is also a satirical portrait of Indonesia's painful past, journeying through almost a century of brutality, from Dutch colonialism and Japanese occupation to revolution, independence and dictatorship. Weaving together history with local legend, Eka Kurniawan spins a fantastical masterpiece in which darkness and light dance hand in hand.

Doesn't that sound simply fascinating and hilarious and beautiful all at the same time? Book Beginnings and Friday 56 are hosted by Gilian over at Rose City Reader and Freda over at Freda's Voice respectively.


'One afternoon on a weekend in March, Dewi Ayu rose from her grave after being dad for twenty-one years. A shepherd boy, awakened from his nap under a frangipani tree, peed in his shorts and screamed, and his four sheep ran haphazardly in between stones and wooden grave markers as if a tiger had been throw in into their midst.' 1%

I simply absolutely love Kurniawan's tone. There are so many moments in this novel where I've been laughing out loud. The novel describes terrible things with a tone that allows the gravitas of the situation to sink in while also allowing the reader to have fun.


'One night, after they had been married for a month, Maya Dewi asked him, "May I go back to school?"

The question was surprising. Of course, she was still of school age, and every girl of twelve belonged in school from morning until afternoon. But she was also somebody's wife and he had never heard of a married woman sitting on a school bench.' 56%

Again, this is both a hilarious teaser in the sense that it's written so laconically that you can't help but snigger. On the other hand it's dealing with something quite serious topics such as child marriages and deprivation of education. I love reads that are both challenging and fun.