Teasers and 'Dinner with Edward' by Isabel Vincent 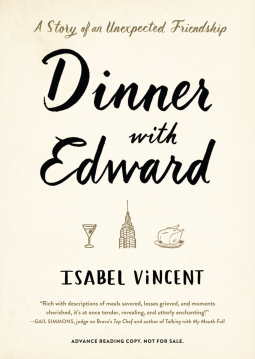 You know that feeling when you see a book and think, 'Hey, I'd like to read that', and then you search through your Kindle and you realize YOU'VE HAD IT ALL ALONG! Anyway, that happened to me with today's book so I decided it would be great to share it with you. Also, please assure me I'm not the only one who suffers from literary dementia! Anyways, the book I'm talking about is Dinner with Edward by Isabel Vincent.

“Over mouthwatering dinners, an odd couple--a nonagenarian and a recently divorced reporter--engage in a series of discussions, from the importance of beauty, to living after loss, to the power of love to redeem and renew, to how to make a succulent duck breast. I loved every moment of this book . . . Everyone deserves her own Edward--and everyone deserves to read this book.” —Susannah Cahalan, bestselling author of Brain on Fire

When Isabel meets Edward, both are at a crossroads: he wants to follow his late wife to the grave, and she is ready to give up on love. Thinking she is merely helping Edward's daughter--who lives far away and asked her to check in on her nonagenarian dad in New York--Isabel has no idea that the man in the kitchen baking the sublime roast chicken and light-as-air apricot soufflé will end up changing her life.

As Edward and Isabel meet weekly for the glorious dinners that Edward prepares, he shares so much more than his recipes for apple galette or the perfect martini, or even his tips for deboning poultry. Edward is teaching Isabel the luxury of slowing down and taking the time to think through everything she does, to deconstruct her own life, cutting it back to the bone and examining the guts, no matter how messy that proves to be.Dinner with Edward is a book about sorrow and joy, love and nourishment, and about how dinner with a friend can, in the words of M. F. K. Fisher, “sustain us against the hungers of the world.”

“A dinner with Edward is nothing to demur. Although the food (I am partial to the roast chicken, lovingly described) is excellent, it is the charming, sweet, and effortlessly wise company that makes this sweet read a charming way to pass a day.” —George Hodgman, New York Times bestselling author of Bettyville: A Memoir

Tuesday Intros and Teaser Tuesday are hosted by Diane over at Bibliophile by the Sea and Jenn over at Books and a Beat. Hop over there to join in on the meme-fun!

I heard about the promise Edward made to his dying wife long before I met him.

Valerie, Edward's daughter and one of my oldest friends, related the story when I saw her shortly after her mother's death. Paula, who was just shy of her ninety-fifth birthday and had been bedridden and drifting in and out of consciousness for days, sat up in bed specifically to address her beloved husband.' 1%

I like this introduction because Edward immediately comes across as a good person. There's also something about promises to dying partners which really get to me. I also noticed I really like Vincent's writing style. It flows very well and I can just keep reading without getting tired.

He needn't have asked. I inhaled the soothing liquid heat and soon after that everything came pouring out of me.' 36%

Aah, this is my kind of read I think. It's a scene I can really easily imagine because I've been in it. Certain situations require a little bit of liquid inducement and a lot of things can be solved over a drink.