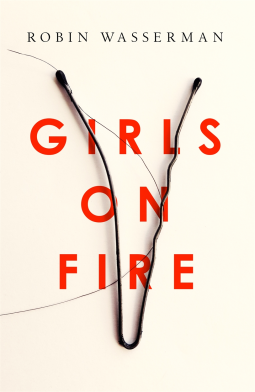 I knew I wanted to read this novel the moment I saw it. Something about it really drew my attention and I was hoping it would fall into the category of books which I have been discovering ever since Gone Girl and Gillian Flynn walked into my life. I'm not quite sure what it is about books with 'Girl' in the title, but they always seem more willing to go the extra mile. Thanks to Little, Brown and Netgalley for a copy of this book in exchange for an honest review.


This is not a cautionary tale about too much - or the wrong kind - of fucking. This is not a story of bad things happening to bad girls. I say this because I know you, Dex, and I know how you think.

I'm going to tell you a story, and this time, it will be the truth.

Hannah Dexter is a nobody, ridiculed at school by golden girl Nikki Drummond and bored at home. But in their junior year of high school, Nikki's boyfriend walks into the woods and shoots himself. In the wake of the suicide, Hannah finds herself befriending new girl Lacey and soon the pair are inseparable, bonded by their shared hatred of Nikki.

Lacey transforms good girl Hannah into Dex, a Doc Marten and Kurt Cobain fan, who is up for any challenge Lacey throws at her. The two girls bring their combined wills to bear on the community in which they live; unconcerned by the mounting discomfort that their lust for chaos and rebellion causes the inhabitants of their parochial small town, they think they are invulnerable.

But Lacey has a secret, about life before her better half, and it's a secret that will change everything . . .

Starting - and ending - with tragedy, Girls on Fire stands alongside The Virgin Suicides in its brilliant portrayal of female adolescence, but with a power and assurance all its own.

In Girls on Fire Wasserman tells us the story of Hannah/Dex and Lacey, two high school girls who find each other as their town does its best to ignore its dark side. Wasserman cleverly splits the story between Dex and Lacey, letting each girl tell their side of the story as they see it now. Occasionally Wasserman also allows another narrator in, whether it's an omniscient one or a brief glimpse into the mind of one of the parents. By expertly flitting between these different narrators Wasserman is able to build an interesting story and tease the reader with character development and plot twists. You can't help but want to know more about Dex and Lacey, their friendship, their town. However, these books do come with the risk that if you're not interested in reading about the internal emotional life of teenage girls then these sort of books won't be enjoyable to you.

The beauty of these types of books, for me at least, is that they don't glorify the stereotypical female roles that we keep seeing in Young Adult fiction. A lot of times, books have to engage in tropes etc. in order to fit within their genre or to tell their story. There is nothing wrong with that by default, but what is wrong is that a lot of times the roles of girls and women are suck within the 'girls are always good, they are by nature sweet and kind' structure. As a young woman it's sort of thrilling to read about girls who aren't good, aren't nice, who make mistakes, etc. because those are the kinds of girls we know. Although it doesn't sound like it, there is quite some freedom in accepting that you're not naturally good because it lets you accept the bad sides of life and of yourself. Girls can be as desperate, nasty and mean as boys can and they can both tear each other down and build each other up. I find it fascinating to read about, but it is a personal thing.

What I find interesting is the growth of this selection of books which focuses almost completely on girls and their struggles with being girls. There are boys and men in Girls on Fire and similar books but they are never the focus. It is strangely gratifying to be able to pick up books which will indulge their female readers in reliving or bringing light to the conflicting feelings that growing up as a female cause. Books such as these verbalize the strangeness that is being a teenage girl. Girls on Fire is a great addition to this selection of books, of which Megan Abbot is another great writer, even if, at times, the story is a little bit repetitive. Dex and Lacey are tightly wound up with each other, which means that their stories are as well. There is also a certain 'darkness' and shock value in Girls on Fire which, if not to your taste, might become off-putting. One has to take a leap of faith, letting the way the characters speak, for example, or the way they seem to feel everything so keenly, not turn one off the book. It may be a little bit over the top but it's part of the experience that eighteen-year olds speak like Romantic poets.

Wasserman's writing style is one of the best things about the book. It is quick and exciting, keeping the reader engaged throughout the book. Wasserman doesn't linger on unnecessary things or try to explain too much either, but rather lets the story continue quite organically. What I also really appreciated about Wasserman's writing in this novel was that she doesn't let form stop her. Too often authors are afraid to switch their writing up, especially when they're writing for the YA or NA market. But Wasserman occasionally breaks with her form, experimenting with repetition or punctuation etc. and these moments were highlights for me.

I really loved Girls on Fire. There is something visceral in reading about angry girls and Wasserman writes about it very well. It won't be to everyone's taste but if this is your genre you'll love it. I'd recommend it to fans of Megan Abbott and YA fiction.
Posted by Juli Rahel at 5/24/2016 02:21:00 pm