Review: 'A Fierce and Subtle Poison' by Samantha Mabry 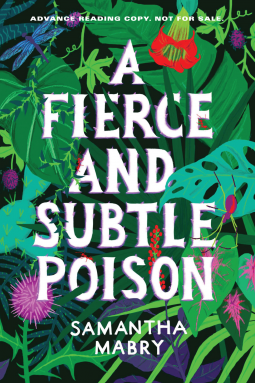 I must admit that it was the novel’s cover which first drew me to A Fierce and Subtle Poison. Something about the way in which the colours popped and how spiked and edged it all was really interested me. You’ll be glad to know, then, that the cover very much represents the novel, in many ways. Thanks to Netgalley and Algonquin Young Readers for providing me with a copy of this book in exchange for an honest review.

In this stunning debut, legends collide with reality when a boy is swept into the magical, dangerous world of a girl filled with poison. Everyone knows the legends about the cursed girl--Isabel, the one the senoras whisper about. They say she has green skin and grass for hair, and she feeds on the poisonous plants that fill her family's Caribbean island garden. Some say she can grant wishes; some say her touch can kill.

Seventeen-year-old Lucas lives on the mainland most of the year but spends summers with his hotel-developer father in Puerto Rico. He's grown up hearing stories about the cursed girl, and he wants to believe in Isabel and her magic. When letters from Isabel begin mysteriously appearing in his room the same day his new girlfriend disappears, Lucas turns to Isabel for answers--and finds himself lured into her strange and enchanted world. But time is running out for the girl filled with poison, and the more entangled Lucas becomes with Isabel, the less certain he is of escaping with his own life.

A Fierce and Subtle Poison beautifully blends magical realism with a page-turning mystery and a dark,  starcrossed romance--all delivered in lush, urgent prose.

A Fierce and Subtle Poison walks the fine line between a number of different genres. On the one hand it feels like a coming of age-novel, with plenty of YA themes running through it. But there is also the Magical Realist edge to it with a plot that veers quite strongly into Thriller or Mystery territory. This mix of genres can either be the strength or the downfall of a novel, but, thankfully, in the case of A Fierce and Subtle Poison it works out for the best. By fluidly moving between genres Mabry keeps her readers on their toes because they can never be entirely sure which way the plot will work out. However, what truly makes the novel is Mabry’s refusal to just use Costa Rica as an exotic setting. Too often authors use non-Western settings to provide some excitement or to make their books feel more inclusive, while absolutely failing to actually include their setting in their book. Mabry’s A Fierce and Subtle Poison is suffused with Spanish phrases, with descriptions of Costa Rican life and with folk tales. And it is in her weaving together of her own stories and those folk tales that the magic of A Fierce and Subtle Poison happens. One couldn’t imagine this novel being set anywhere else, which matters.

A slight let down for me was the fact I couldn’t entirely empathise with Mabry’s main character, Lucas. Son of an American business man building resorts all over Costa Rica, Lucas walks the fine line between being an outsider while also being a native. Half-Dominican and half-American, he is both at an advantage and at a disadvantage. Not as much is made from this as I would’ve hoped, but partially this may be down to me not necessarily being the main target-audience for the novel. There is something about Lucas and his impetuousness which slightly put me off him and made me wish the novel could’ve been split into two narrative voices, one belonging to Lucas and one belonging to Isabel, because Isabel is the one with the fascinating story line. Although Lucas is a good guy throughout the book, there is not necessarily any excitement surrounding him. Isabel, on the other hand, is shrouded in mystery and the small glimpses you receive alongside Lucas only make you want to find out more. She is the one in whom the magic of the novel is most palpably felt and she’s got an interesting journey as well. It feels a bit like a missed opportunity, which is a shame.

Mabry’s writing in A Fierce and Subtle Poison moves between being both lyrical and to the point. She never forgets that her protagonist is a teenage boy who may have certain things on his mind or might respond to certain situations foolishly. On the one hand this means that most of the novel feels quite realistic, while on the other hand the more prosaic parts feel out of character. However, as mentioned above, Mabry treats the local culture with the respect it deserves, rarely slipping into stereotypes. I walked away from the novel with a list of different things I wanted to look into; myths, folk tales, etc. A small gripe is that the plot of the novel doesn’t seem to truly start till halfway through the novel. The build-up suggests a different type of story, whereas the eventual plot happens and ends almost too quickly. By the time the novel ends I was hoping for more. Not necessarily for more exposition or explanation, but for it all to have a little bit more weight. Although this perhaps sounds like I didn’t enjoy A Fierce and Subtle Poison that is not true. I raced through this novel, fascinated by the story Mabry was creating.

I give this novel…


A Fierce and Subtle Poison is a beautiful mix of things which are all kept relatively in balance by Mabry. In the end I’d class it as YA fiction, largely due to the protagonist and the depth of it, but you’ll definitely walk away from this one with an appreciation for Mabry. I’d recommend this to fans of YA fiction and Magical Realism.
Posted by Juli Rahel at 5/16/2016 08:50:00 am