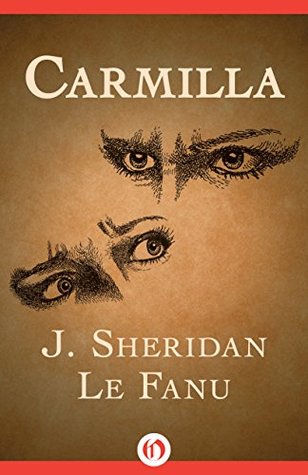 I've decided that what everyone needs when travelling a lot is a good Classic which also features as a thriller. The more intense the more I'll forget I'm on an 8-hour coach journey from Berlin to Karlsruhe! So, with that in mind, I turned to my 100 Classics list and chose Carmilla, the vampire classic by J. Sheridan L. Fanu! With a classic like this, where the mystery is almost part of pop culture the mystery isn't quite as thrilling but it still kept my attention. Slight warning, the blurb could be considered to have spoilers.


Before Dracula, there was Carmilla—the first seductive vampire to haunt readers’ imaginations

This classic of Gothic horror follows Laura, a woman haunted by a girlhood dream of a beautiful visitor to her bedroom. Now, a decade later, Laura finds Carmilla, who appears to be her own age, on the side of the road after a carriage accident. The two recognize each other from the same childhood dream and become fast friends. Soon after, Laura begins to experience mysterious feelings and is once again haunted by nightmares. She finds Carmilla strangely irresistible and longs to be with her.

But as the two friends grow closer, Laura’s health begins to fail. It becomes apparent that her enchanting companion is harboring a sinister secret. To free herself from Carmilla’s grasp, Laura and her family must fight for their lives.

I always like correcting people who think Dracula was the first vampire-story because it's such a fun story how everyone who wrote ghost stories etc. was inspired by each other back in the day. Anyways, that's talk for a different post! Book Beginnings is hosted by Gilion over at Rose City Reader and Friday 56 by Freda over at Freda's Voice.

Upon a paper attached to the Narrative which follows, Doctor Hesselius has written a rather elaborate note, which he accompanies with a reference to his Essay on the strange subject which the MS illuminates.' 1%

I seem to continuously pick up books which are framed within this kind of 'This is a true story'-type of structure. I sort of love how the author tries to convince the reader of the veracity of the story, because it does add some excitement to it.


'In Styria, we, though my no means magnificent people, inhabit a castle, or schloss. A small income, in that part of the world, goes a great way. Eight or nine hundred a year does wonders.' 1%

Styria is, apparently, a county in Austria, which is exactly where I'd expect to find plenty of old castles. Also, the narrator here is the female protagonist and I love her casualness about being able to afford a castle. If I had only 800 a year I couldn't afford even a toilet in London!


'No sylvan drive can be fancied prettier. The ground breaks into gentle hills and hollows, all clothed with beautiful wood, totally destitute of the comparative formality which artificial planting and early culture pruning impart.' 56%

Although not the most fascinating of teasers I sort of love it because why would you break your narrative about sinister secrets and young girls in castle for a little description of horticulture? It doesn't make any sense to me but I guess that's what Gothic books are all about: drama and landscape.