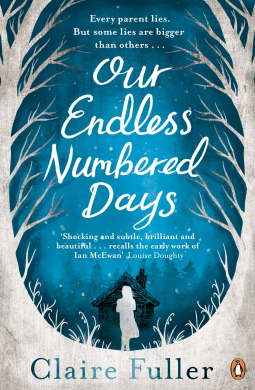 The great thing about this book blogging is that you find little gems like Our Endless Numbered Days by Claire Fuller. There was a lot I loved about this book and I read it in an incredibly short time!
Thanks to Netgalley and Penguin UK for providing me with a copy of this book in exchange for an honest review.


1976: Peggy Hillcoat is eight. She spends her summer camping with her father, playing her beloved record of The Railway Children and listening to her mother's grand piano, but her pretty life is about to change. Her survivalist father, who has been stockpiling provisions for the end which is surely coming soon, takes her from London to a cabin in a remote European forest. There he tells Peggy the rest of the world has disappeared. Her life is reduced to a piano which makes music but no sound, a forest where all that grows is a means of survival. And a tiny wooden hut that is Everything.

Peggy is not seen again for another nine years.

1985: Peggy has returned to the family home. But what happened to her in the forest? And why has she come back now?

Dystopian fiction is usually not my thing but Our Endless Numbered Days walks the line between Dystopian and Psychological Thriller perfectly. Fuller plays with different genres very well, which is something the best novels nowadays seem to do. There are instances where this goes terribly wrong and the novel feels unhinged, but in the best novels it allows authors to fluidly move between genres and give their readers the best of all worlds. Our Endless Numbered Days has moments full of suspense, has chapters that have a Robinson Crusoe-feel to them and at other times it feels like a coming-of-age story. There were a number of different twists and turns, some of which were more predictable than others. But then Our Endless Numbered Days isn't necessarily out to shock you but rather to give the reader an insight into the psyche of a young girl who has robbed of the world.

Peggy is a fascinating main character. From the beginning you're switching back and forth between 1976 and 1985 and the reader gets to see the massive difference between the young, naive child and the young woman that returns to the populated world. Children in fiction are either way too clever for their own good or so annoying you wish they'd grow up quicker. Peggy hits the perfect medium between the two which makes her quite a realistic child. She's perceptive but has her own childish misconceptions about what it is that she's seeing. Peggy the adult has a completely different view of the world but there are a lot of mysteries to her which are fascinating to explore. Fuller really aids her characterization with the time jumps, which could have formed a major distraction. Instead it makes for a very revealing yet suspenseful characterization.

Fuller's writing throughout the novel is very well done. The novel would've failed had she not been excellent at nature descriptions, so thankfully she is. As the forest becomes everything Peggy knows it, at times, almost seems to take on a character of its own which adds another beautiful element to the story. Personally I also loved the way Fuller showed us Peggy's German background. Her mother is German and many of the words Peggy uses are German. Although this might be more difficult for non-German speakers, it was very gratifying for me due to the consistency of it and the strength it added to Peggy's backstory. Too often these kind of "influences" are thrown in by authors without them showing the actual consequences of mixing languages and cultures and it just shows the care with which Fuller approached her work.

Our Endless Numbered Days was a stunning novel which, once I started, I couldn't put back down. Fuller writes a fascinating story which discusses what we do when it turns out our parents did lie about the end of the world. I'd recommend this to fans of dystopian fiction and coming-of-age novels with a psychological twist.
Posted by Juli Rahel at 12/16/2015 07:34:00 am