The story definitely feels like it's properly under way now, with all of the major characters that I know off having been set up. The only character I keep waiting for to reappear is Eponine, but I'm sure that'll happen soon. I have also decided that I am mad about how the musical and film portray Marius... I mean, way to just throw most of his characterization aside when I'm sure that could've somehow been included! Maybe I'll change my mind about it as I continue through the book but so far Les Misérables is the first book where I truly think that the screen adaptation had nothing to add to the story. Anyway, let's get down to the nitty gritty and see what happened in this week's chapters!


Plot Summary:
Marius is very much at the centre of these 20 chapters and since he's still relatively new it's actually fun to dig into his character so deeply. Hugo takes us by the hand as we watch Marius move from poverty to becoming self-sufficient, change from an naive youth to a dreamy adult. And then Hugo hits both us and Marius with beauty as Marius meets what I'm expecting to be Cosette. I swear that it is actually pretty adorable and if this was what happened in the film I'd be so much more ok with it. Hugo seems to revel in getting to describe a young man falling in love and it's all quite dramatic and even funny. His "casual" obsessive strolling past them in the park makes for some fun. The 6th book end with the "mystery girl" and her "father" disappearing so I'm looking forward to seeing how that develops. The chapters that follow afterwards goes quite deep about the dark depths of humanity and was one of Hugo's stranger digressions. We are also introduced to the Patron-Minette, a group that seems to be a mix between a theatre troup and hardcore criminals.

Feel of the Chapters:
Hugo always likes adapting his writing style to make reading about a character feel like being the character, if that makes sense. When Jean Valjean was in the throws of mental agony about revealing himself, Hugo's prose felt equally rambling and shaken. In these chapters he quite happily floats from one thing to the next, the way Marius seems to do. A lot of the previous urgency in the book has fallen away but once Marius feels the stings of love Hugo's love for drama comes back. It makes for a fun read and even a snigger here and there as the sober Marius becomes Love's fool.

Halfway point:
I have officially made it halfway through Les Misérables, which means that, in my copy, I have read 1240 pages of Hugo since my first ever LM Read Through post in late August. In those four months you've stuck with me and I've always loved the comments these posts have received. It's been really surprising for me to find out that I've actually enjoyed reading Les Misérables, a lot. I'm thinking of doing this with other novels I dislike the thought of, i.e. most of Dickens.

Looking back on what exactly it is that I have read it is almost too much to consider. Starting with M. Myriel, we've encountered Jean Valjean, Fantine, M. Madeleine, the Thenardiers, Javert, Cosette, Marius and the Friends of ABC. Hugo has taken his time with sketching each of these characters with care, happily going on major digressions about everything from the Battle of Waterloo to nuns. I now understand the draw of this book, its prose that just pulls you along stubbornly and Hugo's passion. I'm extremely glad to have started this read throug and would probably neve rhave considered reading Les Misérables were it not for The Classics Club and their 100 Classics List initiative! 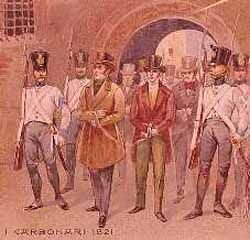 A word popped out at me while reading and that was when Marius' grandfather described him as a carbonaro. Initially I thought he was calling him a pancetta and cream sauce, but since that didn't make sense in this context some research was required. So let me introduces you to the Carbonari. Literally meaning 'charcoal burners', this name stood for a number of secret revolutionary societies in early 19th century Italy. Since the carbonari were spread out in little groups all over Italy they didn't really have a set political agenda, but overall they wanted to create a liberal and unified Italy.

The reason this denominator has any relevance in Les Misérables is because the carbonari were most likely created at least partially in response to the French Revolution. Apparently they had both 'masters' and 'apprentices' and, in their desire to defend the rights of the people against absolutism, were quite happy to commit assassinations and armed revolts. Although this description doesn't entirely fit the image above, I do absolutely love the fact I found out about the carbonari because I like nothing more than secret revolutionary societies!

'Nothing proceeds more directly and more sincerely from the very depth of our soul, than our unpremeditated and boundless aspirations towards the splendors of destiny. In these aspirations, much more than in deliberate, rational coordinated ideas, is the real character of a man to be found. Our chimeras are the things which the most resemble us. Each one of us dreams of the unknown and the impossible in accordance with his nature.' p.1179

I love this quote. I realize it's quite long but there is something beautiful about it. 'chimeras' is also one of my favourite words but I love the idea that we are most ourselves in our dreams and aspirations.

'The first gaze of a soul which does not, as yet, know itself, is like the dawn in the sky. It is the awakening of something radiant and strange.' p.1198

This quote was about Cosette who is blossoming into beauty but it's also about her soul blossoming into happiness after all the hardness in her life. And I've seen it in teenagers, that moment where they first truly start looking at the world around them and its role in relation to themselves.