It's only 10 more days until this year officially ends and if that isn't a shocking thought I don't know what is. There is so much I'm supposed to do till then but instead I'm going to think about what my favourite books were this year! It's been a year full of amazing fiction and non-fiction and, especially for me, some amazing female-written or female-centred books. So you'll be seeing a lot of that in the next ten days!

I'm not restricting myself to books that came out this year, although many of the ones featured on this list will probably have. Rather, I'm hoping that by the 31st I've been able to show you what has happened in my life, book-wise, the last twelve months! I'm looking at my favourites rather than the best because sometimes you love a book while knowing it's not going to win any prizes anytime soon. So they're ranked according to which one I feel has influenced and given me most. Each choice will also be accompanied by an honourable mention because picking just 10 books out of the ones I've read is ridiculously hard

My #10 is Dark Disciple by Christie Golden! Yes, I decided to start our nerdy, but I can't help it. How could I not put this one on the list if as a massive Star Wars fangirl from birth, Golden drops a book into my lap that makes me cry during a family vacation? Exactly! I gave this 4 Universes in August because I know it's quite a niche book, but I still recommend it to everyone who loved The Clone Wars! 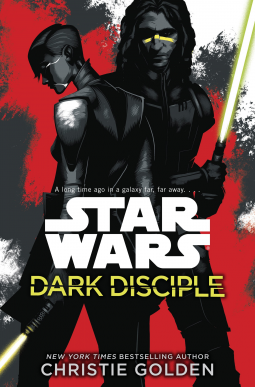 
Based on unproduced episodes of Star Wars: The Clone Wars, this new novel features Asajj Ventress, former Sith apprentice turned bounty hunter and one of the great antiheroines in Star Wars history.

The only way to bring down the Sith's most dangerous warrior may be to join forces with the dark side.

In the war for control of the galaxy between the armies of the dark side and the Republic, former Jedi Master turned ruthless Sith Lord Count Dooku has grown ever more brutal in his tactics. Despite the powers of the Jedi and the military prowess of their clone army, the sheer number of fatalities is taking a terrible toll. And when Dooku orders the massacre of a flotilla of helpless refugees, the Jedi Council feels it has no choice but to take drastic action: targeting the man responsible for so many war atrocities, Count Dooku himself.

But the ever-elusive Dooku is dangerous prey for even the most skilled hunter. So the Council makes the bold decision to bring both sides of the Force's power to bear—pairing brash Jedi Knight Quinlan Vos with infamous one-time Sith acolyte Asajj Ventress. Though Jedi distrust for the cunning killer who once served at Dooku's side still runs deep, Ventress's hatred for her former master runs deeper. She's more than willing to lend her copious talents as a bounty hunter—and assassin—to Vos's quest.

Together, Ventress and Vos are the best hope for eliminating Dooku—as long as the emerging feelings between them don't compromise their mission. But Ventress is determined to have her retribution and at last let go of her dark Sith past. Balancing the complicated emotions she feels for Vos with the fury of her warrior's spirit, she resolves to claim victory on all fronts—a vow that will be mercilessly tested by her deadly enemy . . . and her own doubt.

Not even equally enjoyed this book but I absolutely loved it. From my review:


Dark Disciple made me cry. Not a lot of novels manage to actually get to me in that way but as I neared the final few chapters and pages I was hit by sudden emotion. Christie Golden really got into the story of the novel which can't have been easy considering the characters aren't hers and the story line was already roughly sketched out. Golden develops the tensions between the characters very well, continuing what is set up in The Clone Wars but also adding something new to it. The focus of the novel is split between a number of characters but mainly focuses on Quinlan Vos and Asajj Ventress. As their stories intertwine and separate again and again the reader gets a real understanding of their motives and feelings. Asajj is, however, the shining star of this novel. She is at the very centre of the story and although Quinlan Vos is a very interesting character, Asajj carries the novel from beginning to end.

Asajj Ventress is one of my favourite characters in all of Star Wars. She is a strong female character that is more than just physically strong. The problem with the "strong female character" trope is that these are too often women that can punch and be punched, but who are still incredibly emotionally dependent on the mainly male characters around her. The beauty of Asajj Ventress' story lines throughout TCW and Dark Disciple is that emotional independence and co-dependence is  always a major theme. Her whole relationship with Dooku is based on her seeking his approval and then lashing out when she doesn't get it, whereas her link to her origins, the Nightsisters, is one of strength. Asajj's story is one of growing emotionally, discovering your own worth for yourself and being vulnerable without being "weak". She is an inspirational character and I believe that Dark Disciple continues her story perfectly and is, hence, worthy of her.

Check out the rest of my review if you're intrigued!

Do you like reading novels based on your favourite TV shows or films? And had you heard if Dark Disciple already?
Posted by Juli Rahel at 12/21/2015 03:14:00 pm