We're in the Top Three! How did we get to the end of this year so quickly? So much has changed and yet it's been a whirlwind and I can't even remember what exactly happened! I do remember reading some absolutely brilliant books this year and I've really enjoyed sharing these with you!  For this list I'm not restricting myself to books that came out this year, although many of the ones featured on this list will probably have. Rather, I'm hoping that by the 31st I've been able to show you what has happened in my life, book-wise, the last twelve months!

My #3 is: The Awakening by Kate Chopin!

This is one of those classics which you have to read if you're hunting down feminist literature and it was simply one of the best books I've ever read. It was genuinely a bit heart-breaking and Chopin's prose was absolutely beautiful. Also, the cover was stunning and I read the whole book in a single train journey, that's how much it gripped me. 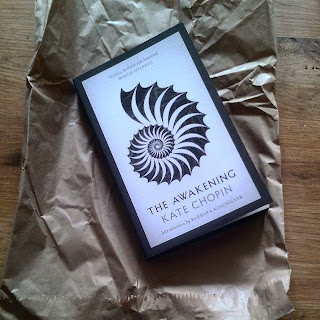 
First published in 1899, this beautiful, brief novel so disturbed critics and the public that it was banished for decades afterward. Now widely read and admired, "The Awakening" has been hailed as an early vision of woman's emancipation. This sensuous book tells of a woman's abandonment of her family, her seduction, and her awakening to desires and passions that threatened to consumer her.

The Awakening is recognized as one of the earliest landmarks for feminist literature. Part of what made it special for its time was that it describes women's issues without being condescending about them. Chopin gets right to the heart of the issues for many women in her time and does so through beautiful prose. Even nowadays, a novel completely dedicated to a woman's spiritual growth, without it being a guide book or a 'how to be happy'-kind of manual, is rare. With The Awakening Chopin unconsciously opened the way for a lot of female authors to express themselves and express women's problems in their own right. Chopin was raised in a house with three generations of independent women: her widowed mother, her grand-mother and a great grand-mother. Herself widowed early in life with six children depending on her, it seems fate that Chopin wrote a novel such as The Awakening.

Although the basic plot of The Awakening seems relatively straight-forward, there is a lot of intricacy in it. The idea of a woman awakening, realizing how restrained she is and how free she could be is hard to explain without sounding either over the top or melodramatic. The beauty of The Awakening lies in the fact that Edna's awakening is completely natural. The awareness that she gains of herself as an independent human being is one which most people nowadays can easily relate to. However, for her time it was something unusual to dedicate a whole novel to. I thought I'd share a beautiful passage with you which showcases Chopin's brilliant writing style:


'There were days when she was very happy without knowing why. She was happy to be alive and breathing, when her whole being seemed to be one with the sunlight, the color, the odors, the luxuriant warmth of some perfect Southern day.' p.144


If you like the sound of it, check out the rest of my review and find your own copy!