Yesterday the news broke that famous Urdu author Abdullah Hussain, who called himself an 'accidental writer', had passed away.

Hussain was nominated for the 'Kamal-e-Fun' award in 2012, which is Pakistan's highest literary award for achievement in creative and research work. Other won awards included the 'Adamjee Award'. His death has been marked by Pakistani President Mamnoon Hussain and Prime Minister Nawaz Sharif. The Minister for Information, Broadcasting and National Heritage, Pervaiz Rasheed, expressed what the loss of Hussain means:


"Pakistan has lost one of its shining stars and its pride in the passing away of Abdullah Hussain, a great author, writer, novelist and intellectual." (Dawn)

Hussain's most famous novel, lauded as a landmark text of Urdu literature, was Udaas Naslain. Even fifty years after its publishing it is still a key novel. In English it was published as The Weary Generations. 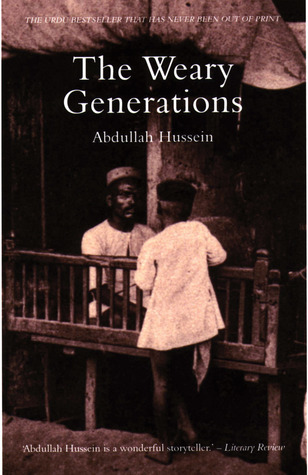 Published ahead of Paul Scott’s Raj Quartet and long before Midnight’s Children, Abdullah Hussein’s ambitious saga of social struggle The Weary Generations was a bestseller in Urdu. Published in 1963 and now beyond its 40th edition, it has never been out of print. A vivid depiction of the widespread disillusionment and seismic upheavals of the Partition era that lead to the creation of Pakistan and Bangladesh, there has never been a more opportune time to discover one of the most important writings about the post-colonial trauma in the region. Naim, son of a peasant, marries Azra, the daughter of a rich landowner. Fighting for the British during World War I he loses an arm. Invalided home, he becomes angered at the subjugation of his countrymen under the Raj and aligns himself with the opposition. His ideals are swept away after Independence in 1947 when he realizes that, as Muslims, his family is no longer safe in their Indian home and that they must migrate to the newly created Pakistan. Regarded as one of the half-dozen most influential novels dealing with Partition or post-colonial malaise, this is an immensely powerful novel in its own right and is essential reading for English language readers seeking to comprehend the historical origins of the tensions in the Indian subcontinent.

I previously wrote about the need for translation to go both ways. Hussain's writing is an example of that. As one of the most important authors to a culture which has been intricately linked with the West in the last century, it is remarkable that Udaas Naslain, or The Weary Generations, isn't better known.