Review: 'Pretty Is' by Maggie Mitchell 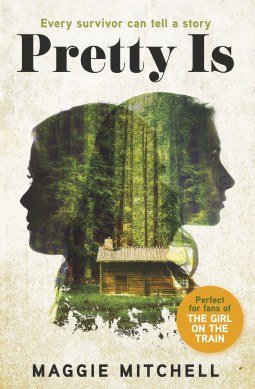 There are some amazing books coming from Orion and all of them manage to fascinate me. Pretty Is was the first book I found after deciding it was time for me to start reading more thrillers. The fact that this novel sounded like a psychological thriller was enough to get me involved. And I am very happy to have picked it up. Thanks to Netgalley and Orion Publishing Group for providing me with a copy of this book in exchange for a fair review.

Lois and Carly-May are just twelve years old when they're abducted, driven across the country, and imprisoned in a remote, isolated hunting lodge for two months. That summer, under the watchful gaze of their kidnapper, they form a bond which will never be broken . . .

Decades later, both Lois and Carly-May have built new lives and identities for themselves. Lois, a professor of literature, is shaken when an obsessive student reminds her of the man who kidnapped her, a man she saw shoot himself on the porch twenty years before. Out in LA, Carly-May is drinking too much and watching her beauty-queen looks fade, clinging to the last remnants of a once-promising career as an actress. When she reads a shockingly familiar screenplay, she warily takes a role she knows is based on events from her own life.

Increasingly haunted by the devastating experience that shaped both their lives, Lois and Carly-May are drawn together again in a world that both echoes and falsifies their beautiful, terrible story.

Considering the two main characters' professions, it is no wonder that Pretty Is feels dramatic. Lois is a literature professor and is also  a secret author, whereas Carly-May is an actress. Their lives are constructed, consciously built up around the lie that they are fine, good even. That was the first thing that drew me in about Pretty Is, this sense of de-constructing the humanity of its characters, stripping away their artifice and exposing the bare bones of their being. Pretty Is doesn't go quite that deep although it definitely takes some trips down there. As the novel progresses the reader finds out more and more about Lois and Carly-May, almost against their will. This slow trickle of information is really what keeps the momentum of the novel going since the reader knows that there is more information hidden on the pages to come. Pretty Is is a novel that is largely carried by its characters, which is not a bad thing.

There are a number of different plot lines in this novel, which Mitchell braids together into one narrative which moves on relentlessly. The reader is as much caught up in the happenings of the plot as the two main characters are. Written from the perspective of Lois and Carly-May, it is no surprise that the narration is unreliable. They are narrow-mindedly focused on their own thoughts and assumptions and therefore miss crucial clues which the reader only slowly gathers themselves. It is really fun to read a book which plays with the reader while playing with its characters.At times some of the side-plots become more interesting than where the actual plot is going but Mitchell manages to bring all of them together quite easily. The only downside is that the end is maybe almost too easy. The end comes quite suddenly and maybe feels a bit rushed considering how long Mitchell allows herself to take to get there.

Having to split her narrative between two narrators required Mitchell to give her characters their own distinctive voice. Although there were no big marked differences, there was a distinct feel to both which made separating them quite easy. The characters surrounding the two protagonists are also really interesting. Some of them at times seem a bit like caricatures, but most of them are relatively well-formed. What helps is that Mitchell's writing style is really enjoyable. It is easy and quick, in the best way. If your plot could be potentially confusing, it is important to make sure your writing doesn't throw people off. Mitchell plays with her words and does so in a fun way. She allows Pretty Is move between being a thriller, being a suspense novel and, almost, a coming-of-age novel as the protagonists deal with their change childhood.

Pretty Is is a really fun read, gripping, thrilling and relatively quick. There are twists, a number of gripping moments and some great character analysis. Mitchell's main characters are interesting and you won't be able to help finishing this novel within days. I'd recommend this to fans of thrillers and suspense novels.
Posted by Juli Rahel at 7/23/2015 08:40:00 am