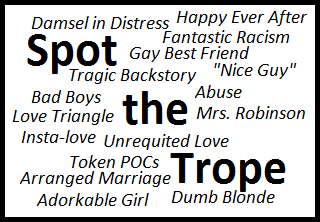 Some time ago I wrote a post about the frequent use of love-triangles in contemporary Young Adult literature and the damage that I believe it does to female characters and the perception of female characters in literature. Recently I read a book which seemed to be made up solely of tropes. Page upon page was filled with recognizable story-lines and standard characterization with nothing new being added. Although I don't believe the author did so on purpose, she included many tropes which once started off as interesting but are now stereotypical and damaging. After reading this book I decided that it might be interesting to take a look at some of the most established tropes currently around and have a look at what they really say. This series won't focus solely on literature but aims to analyse an aspect of story-telling which is often ignored.

What is a trope?
The word 'trope' comes from the Greek word τρόπος (tropos) which means 'turn, direction, way'. Initially this referred to figurative language, the use of a word or phrase for artistic effect, examples being metaphor and hyperbole. More and more, however, the word has come to mean frequently occurring literary devices such as 'the old mentor' or 'the fairy god mother'. Tropes are recognizable and can be used to settle the piece of literature in a genre or in a certain time period. Nowadays readers easily refer to tropes while reading books or watching television, recognizing them instantly and even selecting reads based on their use of certain tropes. These tropes direct the narrative of literary works in a certain way and make them, unfortunately, quite predictable at times. They also hide some very archaic and damaging stereotypes by repackaging them as fun and recognizable, and therefore comfortable. Up today is: the Gay Best Friend!

What is 'the Gay Best Friend'?

The Gay Best Friend (also known as GBF) was one of the first "token diversity characters" which was embraced with open arms by the audience, in both literature and TV shows. The GBF is there to add some diversity and representation of the "other" to an otherwise completely straight-laced story of any number of hetero-sexuals falling in love. When the protagonist is female they are always the best friend she could possibly have because apparently gay men have an amazing insight into both male and female behaviour. When the protagonist is male they are always a good friend with a secret crush on the protagonist. Mind, the GBF is almost always male. The gay men in these books or shows are usually about as stereotypically "gay" as a straight person would imagine them to be. They are fashion aware, incredibly chatty, camp, promiscuous, and forever alone and therefore available to their female friends. The GBF is, more crudely but perhaps more honestly, sometime also known as the 'Pet Homosexual'.


What's good about it?
For a long, and dark, time homosexuality was linked by many people with paedophilia. Aside from this, it was also illegal for a long time to be openly gay and gay marriage was only recently legalized in America. Hence, they hardly featured in popular culture for a long time, except as a cheap joke. The GBF was a different way for homosexual characters to be part of normal and popular narratives. However, at its most stereotypical, the GBF only allows space for one kind of homosexuality, one which is usually ridiculed and presents no danger to the masculinity of the book.

When done well, as, to a certain extent, in The Perks of Being A Wallflower, the male gay character isn't reduced to just a friend without their own personality but is an independent character with an independent story arc. Patrick goes through his own struggles, not necessarily with his sexuality but with the outside response to it. Although his story-line moves along some pretty stereotypical lines such as the the Jock and the overt flamboyancy, his characterization is still insightful and well done which is why the book has made such an impact. However, Patrick's independence as a character is exactly why he doesn't fit into the GBF trope.

Why is it questionable?
As I've hinted at above, the GBF only really gives space to the over-the-top, fashion-aware and promiscuous gay man, despite the fact that this is hardly an accurate portrayal of the average gay man. Fundamentally, the GBF is not there as an independent character. He is part of a support structure and is like a Genie who appears  whenever the protagonist needs advice and then disappears. They are incredibly close with the, usually female, main characters to an extent that their presence often suggests deep friendships can't exist between straight members of the opposite sex, or even between members of the same sex. As a support character, their story arc often revolves completely around the protagonist and leads to enforcing the stereotype around gay people. They are usually referred to as 'my GBF' which has only strengthened the fetishizing of the gay community. A 2013 film, aptly titled GBF, documented the bizarre chasing after a gay men by the whole female population of an American high school.

There is a reason why the GBF is so popular: because he is a male presence that is presented as a non-threat. He can stay the night, be taken underwear shopping or be complained to without the female characters having to fear that he will take advantage. This seems to continue the belief that men are incapable of controlling their sexual instincts and form a danger to every woman who seems available. This has also led to the rise of the 'fake GBF', a man who pretends to be gay so he can get emotionally close to a woman he likes in the hope she'll fall in love with him. Although films and TV shows present this as romantic, it is actually inherently creepy and, again, gives both men and gay men a bad name. The GBF isn't just "safe" for women though. For the male romantic lead, a gay man is no threat and maybe even a help. He is a male presence in the woman's life who will not steal her away and maybe even help his cause. This also leads to a woman being surrounded by a lot of men who are "good" for her, whereas a female friendship is often presented as having issues.

What the GBF trope leads to is the idea that there are no real stories to be told by gay characters, or that their sexuality is the only thing that identifies them. It puts a label on a large section of humanity and prevents literature, and cinema, from exploring these characters more. As the need for diversity is given more attention, it is also important to look at our existing uses of diversity and reassess them. The GBF-trope isn't representation but damaging. For an author it may be an easy way to get a romance plot on the road, but it often looks like lazy writing and characterization. Although the GBF may have started off trying to include gay characters in mainstream popular culture, by now the trope is trailing behind actual social changes to be more open and acceptant of homosexuality.

And to finish this post off, here's one of the many 'Sassy Gay Friend' sketches, which illustrate the use of gay men to prop up female characters quite well. They're also hilarious!
Posted by Juli Rahel at 7/04/2015 03:59:00 pm

Email ThisBlogThis!Share to TwitterShare to FacebookShare to Pinterest
Tags: Gay Best Friend, GBF, Love, Relationships, Spot the Trope, Stereotypes, The Perks of Being a Wallflower