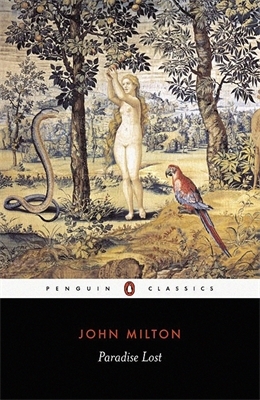 The time has come for me to go down the path that every English student eventually has to go down. I am going to read John Milton's Paradise Lost! I am pretty sure it's quite an undertaking so I'm starting now to five me at least a week and a half of focused reading to get it read. To get myself started I'm using my two favourite Tuesday memes: Tuesday Intros and Teaser Tuesdays, hosted by Diane over at Bibliophile by the Sea and MixB over at Should Be Reading.

‘Better to reign in Hell, than serve in Heav’n …’

In Paradise Lost, Milton produced a poem of epic scale, conjuring up a vast, awe-inspiring cosmos and ranging across huge tracts of space and time. And yet, in putting a charismatic Satan and naked Adam and Eve at the centre of this story, he also created an intensely human tragedy on the Fall of Man. Written when Milton was in his fifties – blind, bitterly disappointed by the Restoration and briefly in danger of execution – Paradise Lost’s apparent ambivalence towards authority has led to intense debate about whether it manages to ‘justify the ways of God to men’, or exposes the cruelty of Christianity.

So, let's get this Satanic show on the road!

'Of Man’s first disobedience, and the fruitOf that forbidden tree whose mortal tasteBrought death into the World, and all our woe,With loss of Eden, till one greater ManRestore us, and regain the blissful seat,Sing, Heavenly Muse, that, on the secret topOf Oreb, or of Sinai, didst inspireThat shepherd who first taught the chosen seedIn the beginning how the heavens and earthRose out of Chaos:' p.1

I like the inspiration from the muses-trope that Milton has going on and I an already sense that this is going to be the kind of read where I read it first for the sound and then to actually understand what is going on!


'Now to the ascent of that steep savage hillSatan had journeyed on, pensive and slow;But further way found none, so thick entwined,As one continued brake, the undergrowthOf shrubs and tangling bushes had perplexedAll path of man or beast that passed that way. ' p.99

Not entirely sure what is happening but I can definitely say that I enjoy Milton's use of language. This is going to be a difficult read!