Review: 'The Visionist' by Rachel Urquhart 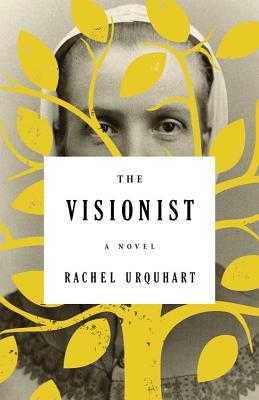 I requested this book because of its fascinating synopsis. On the one hand it was giving me a bit of a The Scarlet Letter vibe, while also feeling slightly fantastical. In the end, this book was nothing I expected and yet gave me everything I could've asked of it.

In this exquisite, transporting debut, 15-year-old Polly Kimball sets fire to the family farm, killing her abusive father. She and her young brother find shelter in a Massachusetts Shaker community called The City of Hope. It is the Era of Manifestations, when young girls in Shaker enclaves all across the Northeast are experiencing extraordinary mystical visions, earning them the honorific of "Visionist" and bringing renown to their settlements.

The City of Hope has not yet been blessed with a Visionist, but that changes when Polly arrives and is unexpectedly exalted. As she struggles to keep her dark secrets concealed in the face of increasing scrutiny, Polly finds herself in a life-changing friendship with a young Shaker sister named Charity, a girl who will stake everything--including her faith--on Polly's honesty and purity.

The plot is one that jumps between different narrators. We switch between the same three characters and  through that the reader gets different insights into the story, which was a great choice on the part of Urquhart because when an integral part of your plot takes place within a community as closed of as the Shakers it is important to have different characters with different opinions. The switch between narrators also meant that each character's story remained fresh and exciting because the reader wants to know how the other characters are affected by what happens. Urquhart's writing style was incredibly interesting and found the right balance between being descriptive and emotive. She also changed style between different characters and the reader gets a real feeling for each of the characters and their positions in life.

The Shaker community is one I knew nothing about before this book and I have to admit to being fascinated now. This is one of the most important things literature can do, make the reader want to know more, investigate and look at the world again. Urquhart manages to describe the Shakers and the idea of a visionist without a trace of judgement and criticism. Not to say there is nothing bad about them, but not more or less than in the rest of the novel. Being able to research a community like this and present it to the reader in a way that makes it come to life is a special thing. Historical fiction needs to be interesting and educative, but also needs to have a story of its own. Urquhart weaves interesting stories while also writing about a very interesting period in time and high-lighting some of its social issues in a way that was great to read.

Not to say that this is an easy read, which leads me to my only issue I had with this book, which was that perhaps there should have been some trigger warnings regarding some of its content. I don't want to give too much away because they are definitely part of the plot, but some of it could be quite shocking to readers who are not prepared. However, I thought it was great to see an author handle such difficult topics with such care and attention. Some great themes in this novel were friendship, love and family, which Urquhart approached from different angles, always managing to find new and interesting aspects about it. I couldn't fly through this novel, it takes time to take hold of you and even then you at times need to take a distance from it, but it's a novel you're bound to remember.

The Visionist is a great novel, one which has real heart and has a message about love and friendship which needs to be discovered but really adds to the reading experience. Urquhart's writing style really pulls the reader in and she really knows how to write captivating moments which you will not forget. I would recommend this to fans of historical fiction and female protagonists.
Posted by Juli Rahel at 1/12/2015 12:50:00 am