'I Can Carry You': Samwise Gamgee and why I love him! 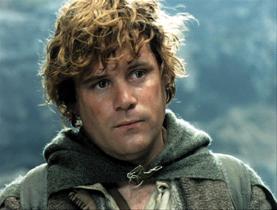 When people are asked who their favourite 'The Lord of the Rings'-character is, the answer is often Aragorn or Legolas, yet I have, thankfully, found that I am not the only one whose answer to that question is Samwise Gamgee. Whereas the movies and books have always been able to make me cry, I have found that more often than not it is because of Sam. In my eyes he represents everything that is right in Tolkien's Middle Earth. Before describing the character, I think enormous credit should be given to Sean Astin. He gave an incredible performance, especially in 'The Return of the King' and I feel he hasn't been praised and awarded enough for it. He is very much the heart of the film. Now, back to Sam.


One of Sam's key positions is as Frodo's retainer. It is a role that is found in many Old English and Middle English texts. The lord's retainer was held at high esteem and mourned after severely if he passed. Frodo might not be your stereotypical lord of the mead hall, but he is Sam's lord. This type of relationship was mirrored in the World Wars between an Officer and his Batman (not that one). The batman was much more of a servant, responsible for the luggage and horses for example, yet it was a desirable position. I think we can recognize some of this in Sam, considering his love for the ponies. In the Second World War, where Tolkien got his inspiration for this relationship, many social boundaries were fading. On the battle field, this relationship quickly became the only glimpse of home these men still beheld. I think this is also reflected in Sam and Frodo. Sam becomes Frodo's home. I think everyone who has seen the films remembers the scene on the slopes of Mount Doom. 'Do you remember the Shire, Mr. Frodo?' Although this scene is different in the book, it very much carries the same meaning. Where Frodo is slowly consumed by the war between himself and the One Ring, Sam brings back the memories of home, the human touches to life that make the bleakest sky light up. But Sam does not just represent Hope for Frodo, but also for the reader. There is one beautiful quote in 'The Return of the King' which shows Tolkien's purpose for Sam beautifully:

"Sam saw a white star twinkle for a while. The beauty of it smote his heart, as he looked up out of the forsaken land, and hope returned to him. For like a shaft, clear and cold, the thought pierced him that in the end the Shadow was only a small and passing thing: there was light and high beauty for ever beyond its reach.”

Through Sam, the reader can see the hope that lies beyond the immediate situation. Whereas we might see other characters fail, through their own fault or no, Sam does no wrong because his ulterior motive is always pure love. He travels with Frodo not because he so desires, but out of friendship and love, and perhaps some pushing from an old wizard. He is the unrelentless drive within human beings to always strive on and improve their situation. Where others give up hope, Sam sees a star and a way forward.

There is an unrelenting strength in Sam, that makes him crucial to the development of the plot.

Speaking of plot, this is where I will make my final stand in this fangirl post. 'The Lord of the Rings' is an incredible meta-textual book. This basically means that the nature of writing and stories is discussed within a story. Inception, but then on a literate level. Take this excerpt from 'The Two Towers' for example:


"'Still, I wonder if we shall ever be put into songs or tales. We're in one, or course; but I mean: put into words, you know, told by the fireside, or read out of a great big book with red and black letters, years and years afterwards. And people will say: "Let's hear about Frodo and the Ring! " And they'll say: "Yes, that's one of my favourite stories. Frodo was very brave. wasn't he, dad?" "Yes, my boy, the famousest of the hobbits, and that's saying a lot."'

Sam is able to see events unfold and see the beauty and worth in them and that makes him special to Tolkien. He, in many ways, leads the plot on by pushing Frodo on and, in perhaps a genius move, Sam finishes the novel.

Sam leads us back to the Shire after Frodo can no longer go on. He has a strength that is rooted in his love for home, for simplicity. He wants to return, even if he will not be the same. Although he is forever changed, he returns and therefore wins. He remains undefeated by the shadow that seemed to pervade everything. He sees and is the light for ever beyond the reach of any kind of evil. And that is why I love him so much.
Posted by Juli Rahel at 4/22/2013 11:48:00 pm