Review: ‘My Name is Monster’ is Katie Hale 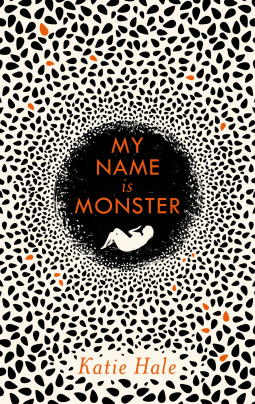 I went into My Name is Monster blindly, not having read the blurb in a while and therefore only having a very vague awareness of what the book was about. As such, Katie Hale took me on a journey with her characters, letting me slowly discover the world she describes page by page. I think I'm going to have to do this more often because My Name is Monster absolutely captured me. Thanks to Canongate and Netgalley for providing me with a copy of this book in exchange for an honest review.

After the Sickness has killed off her parents, and the bombs have fallen on the last safe cities, Monster emerges from the arctic vault which has kept her alive. When she washes up on the coast of Scotland, everyone she knows is dead, and she believes she is alone in an empty world.

Monster begins the long walk south, scavenging and learning the contours of this familiar land made new. Slowly, piece by piece, she begins to rebuild a life. Until, one day, she finds a girl: feral, and ready to be taught all that Monster knows. Changing her own name to Mother, Monster names the child after herself. As young Monster learns from Mother, she also discovers her own desires, realising that she wants very different things to the woman who made, but did not create, her.

Inspired by Robinson Crusoe and Frankenstein, My Name is Monster is a novel about power, about the things that society leaves imprinted on us when the rules no longer apply, and about the strength and the danger of a mother’s love.


Dystopian fiction has developed into a very ecological genre, to the point where they are now often apocalyptic in nature. A few years ago dystopian novels mostly showed the destruction of our way of life being caused by a corrupt elite or a right-wing political group, showing how our current society becomes a slippery slope that will lead to disaster. The recent dystopian novels I have read often refer to an ecological disaster, whether it is actively climate change leading to the destruction of our cities or other “minor” causes such as a plague or a virus against which we can’t defend ourselves. Now the future we're facing is a wasteland, more Mad Max than 1984. Each time I see a genre adjust itself to our current culture this way I am once again astounded by how important literature is in providing us with a mirror. We often see ourselves reflected in literature, both our good sides in the heroes and our bad sides in the villains. What makes these new ecological novels stand out is that there is no real villain, in the way we’re used to. There is no corrupt government to blame, no nationalist group, no crazed prophet. Instead there is just an awareness that, in our own simple way, we all contributed to this slow destruction. Reading these kind of novels can be uncomfortable, but it is also very important.

In My Name is Monster the Earth has been ravaged by the Sickness, a disease we never hear much about but see the consequences off. We join Monster as she arrives on the shores of Scotland. We don't know yet why or how she's there, nor where everyone else is. As she slowly makes her way to her parents' village where she grew up, to verify they truly are gone as well, we become more acquainted with her story and with what happened. We get to know something of her childhood, during which she got her nickname which has now become her only name and during which she always felt different. Not in a wilting wallflower kind of different, but as someone set apart by her interests and not too worried about being different. She makes rare connections with others but seems deeply uninterested in others, which becomes part of her survival instinct. That is, until she sets up shop in an abandoned farm and, during one of her daily forages in an abandoned city, finds a child, feral and seemingly without any memories. She names the child Monster and herself as Mother, defining the former as 'survivor' and the latter as 'creator'. While the first part of My Name is Monster follows Monster/Mother, the second part is devoted to the now teenaged Monster 2.0. We find out more about her vague memories of the pre-Sickness world, but mostly we explore her small world with her. We begin to see Mother through her eyes and My Name is Monster shows some achingly beautiful moments between the two. As the two women build their fragile relationship and home in this destroyed world, the novel meditates on such themes as motherhood, survival, power and silence. It is a lot, but Katie Hale manages to bring them all together into a truly stunning narrative.

The blurb it is mentioned that the novel is inspired by Robinson Crusoe and Frankenstein. In part I can see how both of these gave Katie Hale something to work off. Survival is key to Robinson Crusoe, to the extent that as a kid I believed it was a genuine 'how-to' guide, rather than a novel. In the eponymous novel Robinson Crusoe has to survive alone on an island, learning how to build, till the earth and keep animals. However, Robinson Crusoe is also a product of imperialism, a novel that smacks of old attitudes, which My Name is Monster is not. There is survival, but of a different kind. The novel has more in common with Frankenstein, in which the monster reveals itself to be deeply human and deeply scarred by the society it is thrust into. The two women central to My Name is Monster are, in many ways, scarred as well, both physically and mentally. The relationship they develop is new and scary to them both, yet they cling to each other fiercely. It is the human need for companionship and for hope that suffuses My Name is Monster and it leads to some truly beautiful moments.

I had never heard of Katie Hale before, but as I looked into her after reading My Name is Monster I found out she considered herself a poet first and foremost. (Reading through some of her poems I found that Go into the Woods spoke to me on the same level as My Name is Monster.) There is a magic to her descriptions which belie their simplicity. Whether it is Monster making her way across the Scottish wasteland or Monster 2.0 wondering at the silence atop a hill, there is a wildness that Hale captures through the simplicity of her prose. For some the pace of My Name is Monster might be too slow, but it is a contemplative novel that says a lot in few words. A lot is said in a silence and Hale embraces this in a world devoid of the rush of crowds. My Name is Monster, despite its apocalypse and occasional horror, is a delicate novel that does ask its readers to do some thinking and reckoning. What is it to be a monster? What does survival take? How desperate are we for a human connection? And how do we go on when all else seems to have gone? Hale doesn't claim to have all the answers, but in My Name is Monster she does show us a potential way.

My Name is Monster is a stunning novel, showing us an apocalypse that can, perhaps, bring us back to our humanity. For those who enjoyed novels like Station Eleven, I'd definitely recommend Hale's debut novel. Anyone looking for a quiet contemplation on love and survival, look no further than My Name is Monster.
Posted by Juli Rahel at 6/16/2019 01:18:00 pm