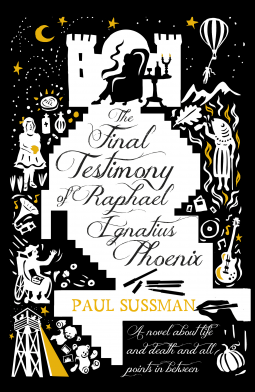 Tuesday Intros is hosted by Diane over at Bibliophile by the Sea and Teaser Tuesday is hosted by MizB over at Should Be Reading (who is currently taking a well-deserved reading break). This week I'm using The Final Testimony of Raphael Ignatius Phoenix by Paul Sussman.

‘My name is Raphael Ignatius Phoenix and I am a hundred years old – or will be in ten days’ time, in the early hours of January 1st, 2000, when I kill myself…’

Raphael Ignatius Phoenix has had enough. Born at the beginning of the 20th century, he is determined to take his own life as the old millennium ends and the new one begins. But before he ends it all, he wants to get his affairs in order and put the record straight, and that includes making sense of his own long life – a life that spanned the century. He decides to write it all down and, eschewing the more usual method of pen and paper, begins to record his story on the walls of the isolated castle that is his final home. Beginning with a fateful first adventure with Emily, the childhood friend who would become his constant companion, Raphael remembers the multitude of experiences, the myriad encounters and, of course, the ten murders he committed along the way . . .And so begins one man’s wholly unorthodox account of the twentieth century – or certainly his own riotous, often outrageous, somewhat unreliable and undoubtedly singular interpretation of it.


'This is going to be the longest suicide note in history. A titanic epitaph. A monstrous obituary. A real rolling spouting blue-whale bloody whopper of a confession. And since it's going to end with The Pill, I might as well start that way too.Small and white and round, like a powdery tear, with no obvious defining features save a slight bick in its otherwise perfect circumgerence, The Pill was made by Emily's father, a pharmacist in turn-of-the-centry London. It is not, admittedly, on the face of it, an object to particularly capture the imagination. Certainly not one to start as extraordinary a story as I shall fortwith be recounting. As with so many things in my long and convoluted life, however, ther eis more to The Pill than meets the eye.' p.1

I'm absolutely loving the writing style here. I'm a bit of a sucker for a flowery style and throw-away vocabulary that makes me nosedive into a thesaurus, so I have a feeling I'm really going to enjoy this one. The review should hopefully be up by the end of the week!

'As planned, I climbed up the roof, carrying with me my pudding and drink and cigarettes.' p.136

The roof sounds like a perfect place for pudding, drinks and cigarettes.

'The note's starting to look like a herbaceous border. What began as a dignified procession of mournful black letters now looks like something out of the Chelsea Flower Show.' p.23

Again, loving how fluid Sussman's writing style is.The way he plays with words is doing things for me!

So, how about you? Does this sound like your kind of book? And what are you teasing with?
Labels: Paul Sussman Teaser Tuesday The Final Testimony of Raphael Ignatius Phoenix Tuesday Intros