Stacking the Shelves & It's Monday! What Are You Reading?

It's Monday and I have seriously started writing my essays. And thank God they're interesting because otherwise I'd be dying a painful academic death at the moment. Stacking the Shelves is hosted by Jenn over at Tynga's Reviews and It's Monday! What Are You Doing?  is hosted by Sheila over at Book Journey.

The Watcher in the Shadows by Carlos Ruiz Zafon (review here)

A mysterious toymaker who lives as a recluse in an old mansion, surrounded by the mechanical beings he has created ...an enigma surrounding strange lights that shine through the mists that envelop the small island on which the old lighthouse stands...a shadowy creature that hides deep in the woods...these are the elements of a mystery that bind will bind 14-year-old Irene to Ismael during one magical summer spent in the Blue Bay. He mother has taken a job as a housekeeper for the toymaker, Lazarus, but his house contains more secrets than Irene and Ishmael have bargained for.

A seminal work of twentieth century drama, Waiting for Godot was Samuel Beckett's first professionally produced play. The story line revolves around two seemingly homeless men waiting for someone or something named Godot. Vladimir and Estragon wait near a tree on a barren stretch of road, inhabiting a drama spun from their own consciousness. The result is a comical wordplay of poetry, dreamscapes, and nonsense, which has been interpreted as a somber summation of mankind's inexhaustible search for meaning. Beckett's language pioneered an expressionistic minimalism that captured the existentialism of post-World War II Europe. His play remains one of the most magical and beautiful allegories of our time.

Gone Are The Leaves by Anne Donovan (review here) 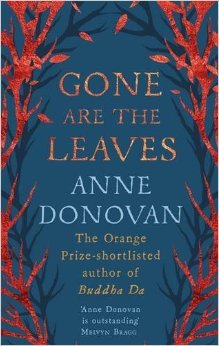 Feilamort can remember very little of his childhood before he became a choir boy in the home of the Laird and his French wife. Feilamort has one of the finest voices in the land. It is a gift he believes will protect him...Deirdre has lived in the castle all her short life. Apprentice to her mother, she embroiders the robes for one of Scotland's finest families. She can capture, with just a few delicate stitches, the ripeness of a bramble or the glint of bronze on a fallen leaf. But with her mother pushing her to choose between a man she does not love and a closed world of prayer and solitude, Deirdre must decide for herself what her life will become. When the time comes for Feilamort to make an awful decision, his choice catapults himself and Deirdre head-first into adulthood. As the two friends learn more about Feilamort's forgotten childhood, it becomes clear that someone close is intent on keeping it hidden. Full of wonder and intrigue, and told with the grace and charm for which Anne Donovan is so beloved, Gone Are the Leaves is the enchanting story of one boy's lost past and his uncertain future.


Darth Plagueis and Darth Sidious, Master and acolyte, target the galaxy for domination--and the Jedi Order for annihilation. But can they defy the merciless Sith tradition? Or will the desire of one to rule supreme, and the dream of the other to live forever, sow the seeds of their destruction?

For the rest I'm not quite sure what I'm reading this week because I'm trying to focus on university.

I got two anthologies from Netgalley this week:

Last Stories and Other Stories by William T. Vollman

In this magnificent new work of fiction, his first in nine years, celebrated author William T. Vollmann offers a collection of ghost stories linked by themes of love, death, and the erotic.A Bohemian farmer’s dead wife returns to him, and their love endures, but at a gruesome price. A geisha prolongs her life by turning into a cherry tree. A journalist, haunted by the half-forgotten killing of a Bosnian couple, watches their story, and his own wartime tragedy, slip away from him. A dying American romances the ghost of his high school sweetheart while a homeless salaryman in Tokyo animates paper cutouts of ancient heroes.Are ghosts memories, fantasies, or monsters? Is there life in death? Vollmann has always operated in the shadowy borderland between categories, and these eerie tales, however far-flung their settings, all focus on the attempts of the living to avoid, control, or even seduce death. Vollmann’s stories will transport readers to a fantastical world where love and lust make anything possible.


The Professor and the Siren by Giuseppe Tomasi di Lampedusa

In the last two years of his life, the Sicilian aristocrat Giuseppe Tomasi di Lampedusa, in addition to his internationally celebrated novel, The Leopard, also composed three shorter pieces of fiction that confirm and expand our picture of his brilliant late-blooming talent. In the parable-like “Joy and the Law,” a mediocre clerk in receipt of an unexpected supplement to his Christmas bonus (an awkwardly outsize version of the traditional panettone) finds his visions of domestic bliss upset by unwritten rules of honor and obligation. At the heart of the collection stands “The Siren” and its redoubtable hero, Professor La Ciura, the only Hellenist scholar to claim firsthand experience of ancient Greek—from the mouth of the beautiful half-human sea creature he loved in his youth. The volume closes with the last piece of writing completed by the author, “The Blind Kittens,” a story originally conceived as the first chapter of a follow-up to The Leopard, a novel that would have traced the post-unification emergence of a new agrarian ruling class in Sicily, coarser than its predecessor but equally blind to the inexorable march of change. This elegant new translation of Lampedusa’s complete short fiction, the first by a single hand, updates and corrects previously available English versions.

So, what are you reading and what did you read last week?

Email ThisBlogThis!Share to TwitterShare to FacebookShare to Pinterest
Tags: Gone Are The Leaves, It's Monday, Stacking the Shelves, The Watcher in the Shadows, Waiting for Godot, What Are You Reading?