Stacking the Shelves & It's Monday! What Are You Reading?

It's the beginning of a new week and I get to start it with work, which is absolutely delightful! But we all need money to fuel our everlasting desire for more books to read, so I guess work isn't too bad a thing. If only it wasn't this hot! Stacking the Shelves is hosted by Stephanie over at Tynga's Reviews and It's Monday! What Are You Reading? is hosted by Sheila over at Book Journey.

Last week:
I unfortunately only managed to read two books for review last week, which were:

The Unbearable Dreamworld of Champa the Driver by Chan Koonchung (review here).

Life is simple for Champa. He has a good job as a chauffeur in his hometown of Lhasa, and if his Chinese boss Plum is a little domineering, well, he can understand that – she’s a serious art-collector after all. And he does get to drive her huge Toyota.When he starts to sleep with his boss as well as drive her around, life becomes a whole lot more complicated. But not in a bad way. Suddenly Champa’s sex life is beyond his wildest dreams.

But then Plum brings home a Tara statue - a statue that shines with exquisite feminine beauty – and suddenly life is not simple at all, as Champa finds himself on the long road to Beijing in search of its inspiration. And it’s going to be a rough ride…

The Professor and the Siren by Giuseppe Tomasi di Lampedusa (review here).

In the last two years of his life, the Sicilian aristocrat Giuseppe Tomasi di Lampedusa, in addition to his internationally celebrated novel, The Leopard, also composed three shorter pieces of fiction that confirm and expand our picture of his brilliant late-blooming talent.

Since I've basically got the week off (revision doesn't count), I'm planning on reading a whole lot of books which won't fit into one post (it's important to set goals, even if they're impossible). So here's just two I'm hoping to read/finish.

I, Claudius by Robert Graves.

From the Autobiography of Tiberius Claudius, Born 10 B.C., Murdered and Deified A.D. 54:Considered an idiot because of his physical infirmities, Claudius survived the intrigues and poisonings of the reigns of Augustus, Tiberius, and the Mad Caligula to become emperor in 41 A.D. Historical novel set in 1st-century-AD Rome by Robert Graves, published in 1934. The book is written as an autobiographical memoir by Roman emperor Claudius. Physically weak, afflicted with stammering, and inclined to drool, Claudius is an embarrassment to his family and is shunted to the background of imperial affairs. The benefits of his seeming ineffectuality are twofold: he becomes a scholar and historian, and he is spared the worst cruelties inflicted on the imperial family by its own members during the reigns of Augustus, Tiberius, and Caligula. Palace intrigues and murders surround him. Claudius' informal narration serves to emphasize the banality of the imperial family's endless greed and lust. The story concludes with Claudius ascending to the imperial throne. A sequel, Claudius, the God and His Wife Messalina (1935), covers Claudius' years as Roman emperor.

This book really lifts historical fiction to a whole new level. I have immensely enjoyed what I've read of it so far.

Dinner with Stalin and Other Stories by David Shrayer-Petrov.

These fourteen stories by the acclaimed master of Jewish-Russian fiction are set in the former USSR, Western Europe, and America. Dinner with Stalin features Soviet Jews grappling with issues of identity, acculturation, and assimilation. Shrayer-Petrov explores aspects of antisemitism and persecution, problems of mixed marriages, dilemmas of conversion, and the survival of Jewish memory. Both an author and a physician, Shrayer-Petrov examines his subjects through the double lenses of medicine and literature. He writes about Russian Jews who, having suffered in the former Soviet Union, continue to cultivate their sense of cultural Russianness, even as they—and especially their children—assimilate and increasingly resemble American Jews. Shrayer-Petrov’s stories also bear witness to the ways Jewish immigrants from the former USSR interact with Americans of other identities and creeds, notably with Catholics and Muslims. Not only lovers of Jewish and Russian writing but all discriminating readers will delight in Dinner with Stalin and Other Stories.

I've read the first of the fourteen stories already and that one was really good. 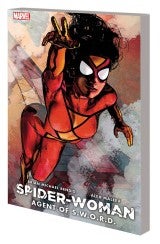 There isn't a lot on my Mailbox this week, thank God. I seriously need to save up some money because rent is threatening me in three months time! But I was incredibly sneaky and won the following on Ebay:

Ripped from the pages of SECRET INVASION and NEW AVENGERS, this explosive chapter follows the new adventures of Jessica Drew aka Spider-Woman as she rediscovers her life in a world she did not make.


I have been going a bit Marvel crazy lately and my newest crush is Spider-Woman. At first I thought it was incredibly cheesy how they ripped of Spiderman, but then I realised she is actually a fully developed, independent character. I think this, and the Star Wars comic I got not too long ago, might become one of my first comic reviews.

So, what about you? What did you read last week? And did you get any exciting new books?

Email ThisBlogThis!Share to TwitterShare to FacebookShare to Pinterest
Tags: Comic, Dinner with Stalin and Other Stories, I Claudius, It's Monday, Spider-Woman, Stacking the Shelves, The Professor and the Siren, What Are You Reading?