Review: 'The Plague' by Albert Camus 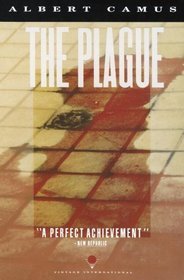 This is one of the novels I put on my 100 Classics list because I was really interested by Camus' ideas about life and destiny etc. and this novel sounded like it explored these themes. Also, the Plague is a very interesting subject for a novel and I found myself enjoying it although at times I felt Camus lingered too long on certain events.


A gripping tale of human unrelieved horror, of survival and resilience, and of the ways in which humankind confronts death, The Plague is at once a masterfully crafted novel, eloquently understated and epic in scope, and a parable of ageless moral resonance, profoundly relevant to our times. In Oran, a coastal town in North Africa, the plague begins as a series of portents, unheeded by the people. It gradually becomes a omnipresent reality, obliterating all traces of the past and driving its victims to almost unearthly extremes of suffering, madness, and compassion.

The novel is set in the 1940's, in the Algerian city Oran, which actually suffered from a cholera epidemic in 1849. The title makes it clear that the Plague will come, no matter how resistant Oran's citizens are at the beginning. The slowly creeping disease is described masterfully as it changes from threat to imminent danger. Throughout, Camus manages to not let the book slide into mass-hysteria. By that I mean that it would have been easy , at this point in the novel, to over-dramatize and explicitly state the horror of the Plague. Camus' understated yet severe writing style brings the fear of the Plague much closer because it showcases the inability of the people to do anything about it. Critics have argued that this was Camus bringing in his notions of the Absurd. Absurdism is a philosophical theory that argues that humans constantly seek for a meaning to life, yet are incapable of finding that meaning. This is perhaps best characterized by the characters of Grand, I feel. Grand is a writer of questionable talents, who spends the majority of the novel trying to find the perfect opening line to his novel. In the constant adding, changing and removing of adjectives, Grand hopes to give a meaning to a sentence that is simple in its essence. The sentence becomes meaningless as Grand mulls over it and it is one of the few true tragedies in the novel that this man is incapable of letting his search for meaning go and thereby misses out on his own life.

The Plague is a very male novel, in the sense that all of the main characters are men. A feminist critique has probably already been written, arguing that Camus takes away agency from women by not showing them helping against the progression of the Plague. But rather, I feel, the women play an important, yet background, role. Dr. Rieux' mother, for example, remains largely in the shadows of the novel but is a point of trust and comfort for Rieux and later on Tarrou. She seems unaffected by everything that is going on around her and hardly changes, thereby managing to be like a calm in the storm. Similarly, through the absence, the wives of Grand and Rieux allow them to help the Plague-stricken town while also hoping for an end to the disease. They also help Camus in setting up the themes of exile and loneliness that strikes most of Oran's citizens. The isolation that many of the people feel is palpable through the absence of women in the novel. Seeing them as symbols for fertility and life, their non-presence doesn't bode well for the town which is slowly dying out.

Camus wrote this novel as a kind of memoir, a collection of documents that are put together to form a true recollection of those years under the Plague. However, it is not told through first person, but rather, quite objectively and from a distance through a third person-narrator. Although this narrator reveals himself at the end and states his reasons for this distance, it causes the reader himself to also be removed from the heart of the tragedy. We are like the people outside of the town, looking and peeking over the walls but keeping a safe distance. People are described through their actions and words, but the narrator doesn't try to ascribe emotions to them. Through this, the few moments where the reader is practically pushed to the bedsides of the suffering and dying are extremely tragic and stand out, becoming the moment that the reader remembers clearest.

I enjoyed reading this book, yet there were certain elements to it that prevented me from completely devouring it. The distance created by Camus between the reader and the town meant that as a reader you a very detached from the narrative. I wasn't completely drawn in and as such took quite a long time to read it. Camus' philosophical ideas are close to the surface of the novel and when they break through very interesting, but at times I felt they were interrupting the narrative. I would recommend it, however, because the way he describes how the Plague takes hold is fascinating.
Posted by Juli Rahel at 2/23/2014 03:11:00 pm