Born in Australia in 1882, Manning moved to England in 1898 with a close friend and finally settled there in 1903. He started a career of writing reviews and independent fictional work here and there, becoming friends with the likes of Ezra Pound and Richard Aldington. He enlisted in 1915 and became Private 19022, which he used as a pseudonym later to publish Her Privates We. He was sent to the Battle of the Somme, the experience of which he recounts in his novel. Manning wasn't a healthy man and on top of that a heavy smoker and drinker, which prevented his chances of becoming an officer.

Manning's protagonist, Bourne, is modelled to a certain extent upon the author himself, although I think Manning is guilty of presenting himself more favourably despite not forgetting to mention his faults. Bourne is his own man, aware of both the camaraderie and isolation caused by War, and although he initially seems more than capable to survive cope, he slowly changes over the course of the novel. Written in third person, you don't get Bourne's internal dialogues to the same extent as if it had been written in first person like Under Fire or All Quiet on the Western Front, but the reader is still privy to his thoughts. Although the other novels and poems picked up on the sometimes ridiculous bureaucracy and rules of the army, none of the authors are as critical of it as Manning is. His independence also extends to his autonomy and his dislike for taking a commission and becoming an officer translates to a dislike of joining the system. The officers and sergeants that populate the novel are not automatically "superior" characters. Often they are vengeful, petty and unable to take independent initiative. More than in any other novel, the War seems absolutely hopeless and stuck. 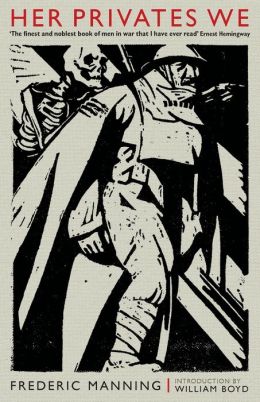 Each chapter in this novel is preceded by a Shakespeare quote, which I naturally looked up immediately. The plays most quoted are the two Henry IV's and Henry V. Especially Henry V is a very military play, centering around the figure of King Henry V and his campaign in France. Especially the scenes around Harfleur are very interesting, where the true brutality of warfare is brought to the forefront. I can see how this play that tries to deal with the justness and effectiveness of war and the emergence of a good leader, would to some extent inspire Manning. The two Henry IV's show the growth of Prince Hal into a crown prince worthy of the throne and an old leader slowly declining. Bourne, and Manning, are both older soldiers in their thirties, surrounded by younger men and death. It must have been difficult to see 18 year-olds die besides you when you are still living. It's survivor's guilt and during the First World War they didn't recognize PTSD as  an actual consequence of the fighting in the trenches.
One of my favourite quotes from the novel is

'They marched out of the village, past the stone cavalry at the end of it, and men who had known all the sins of the world, lifted, to the agony of the figure on the cross, eyes that had probed and understood the mystery of suffering.' p.129

I really like the way Manning compares and contrasts the soldiers to Jesus. The set up of the scene is quite reminiscent of Judgement Day, the sinners walking past Jesus in rows, being judged on their sins. The way Manning writes it, he compares the suffering of Jesus on the cross to that of himself and the other soldiers. Both of them are bearing the consequences for the sins of others. While others make decisions that control their lives, they risk their lives every single day. And yet there is an undertone of brutality and a bestial nature to the soldiers, very different from the saintliness that exudes from Jesus. And the soldiers aren't finished yet, but march on and on. This novel is, in many ways, darker and more tragic than the others because it is very unapologetic.