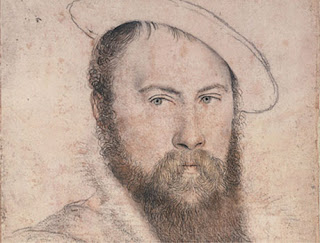 In my 'Studying Literature' module we have now moved on from 'Wolf Hall' and started on Thomas Wyatt's poetry. And I thought, what better way to analyse and inform myself then to share with you. I will analyse this sonnet, 'Whoso List to Hunt', and in the process find out more about Wyatt and sonnets. How much does Wyatt look like Henry VIII in this portrait? It's almost wrong.


Whoso list to hunt, I know where is an hind, But as for me, alas! I may no more. The vain travail hath worried me so sore, I am of them that furthest come behind. Yet may I by no means, my worried mind Draw from the deer; but as she fleeth afore Fainting I follow. I leave off therefore, Since in a net I seek to hold the wind. Who list her hunt, I put him out of doubt, As well as I, may spend his time in vain; And graven in diamonds in letters plain There is written, her fair neck round about, "Noli me tangere, for Caesar's I am,And wild to hold, though I seem tame."

First, the sonnet form and Petrarch. The two go hand in hand. 'sonnet' comes from the Italian word 'sonetto', which means 'little sound'. A sonnet is usually a poem of fourteen lines and Thomas Wyatt used the Italian rhyming scheme. This means:

This form was developed by the Italians and Wyatt and Shakespeare both used it. He also uses the iambic tetrameter. Now, onto the analysis.

'Whoso list to hunt' is a question that asks whoever wishes to hunt because he knows a 'hind' worth hunting. The 'hind' here could be interpreted as meaning a woman. Hunting was often a metaphor for courting, putting the men in the position of 'hunter' and thereby making him the dominant one. The second line shows he himself once hunted but has given up. This might refer to him having given up hunting this specific woman, but it could also be that he has given up on hunting itself. He calls it 'vain' and says it has worried him 'sore' which means he always 'cometh behind'. He here admits he is no good at the hunt and always comes in last when trying to make a conquest. We can here see how Wyatt is introducing the 'proposition' or 'problem' to us.

Although he admits he is failing at the hunt in line 4, he also says he cannot 'draw' his 'wearied mind' from this 'deer'. Here, the use of 'deer' could be given an extra connotation. Phonetically, it is very similar to the word 'dear', again implying that the poem is not about actual hunting but rather courtship. He follows her 'fainting', but  he again admits defeat in a line that I think is beautiful.
'I leave off, therefore/Since in a net I seek to hold the wind'
I really like this line. He is implying this woman cannot be won, especially not by him. She is like the wind, always escaping his grasp yet always around him as well. The sestet starts at line 9, with Wyatt putting every other hunter 'out of doubt' about the futility of their hunt. Around her neck, this hind has a necklace 'graven with diamonds' that reads 'Noli me tangere, for Caesar's I am'. 'Noli me tangere' means as much as 'do not touch me'. The pursuit of this hind/woman is pointless because she alreadt belongs to Caesar and no other man can therefore have her. The necklace also says 'and wild for to hold, though I seem tame'. This woman is wild and strong although she may make the appearance of being soft and tame. Here it is easy to explain the poem through historical context, almost too easy. Wyatt, in 1536, was almost thrown into the Tower for allegedly sleeping with Anne Boleyn, the Queen and wife of Henry VIII. This poem could be read as Wyatt showing us how his pursuit of Anne was pointless and tiring as she belonged to the King ('Caesar') and could therefore not belong to him. It could here be noted he did get close enough to see the necklace on her 'fair neck', implying some kind of intimacy.

The lecture today said this was the major trap of historical context. It is too often used to explain away a poem and other interpretations are therefore missed. A possible interpretation he offered for this sonnet was the denial of a relationship between Anne and himself rather than a confirmation. Wyatt was a courtier and as ambassador he had to have a good relationship with the King. By saying he, nor any other man for that matter, could catch Anne but that she herself wore a necklace that stated her as the King's, he could be seen as protecting himself against Henry's possible wrath.