In My Mailbox: Not Enough Shakespeare

I got so many books this week, it's almost ridiculous if it weren't for the fact that I do English. So I bought 8 books that I will either have to read for modules or, in case of the grammar book, I will need to make sense of my modules. In My Mailbox is hosted by The Story Siren. I am not looking forward to Dickens, but at least I have until Friday to read 'Hard Times'.

I went slightly overboard in the library. I only wanted to get one, because I am 'defending' the position in one of my modules that 'The Lord of the Rings' should be taught in our first year. But then I found 'Tolkien: A Cultural Phenomenon', which mentioned 'The Road to Middle-Earth'. And the other one just seems amazing and all the essays in it are really interesting.

Here are the books I bought:
'Richard II' - Shakespeare 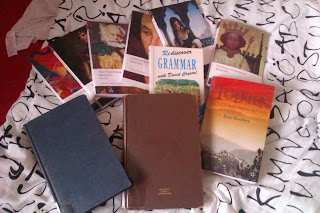 For Review:
'Daughter of the Goddess' - Rita J. Webb

What I posted this week:
The English Canon and Classics
I did Follow Friday
Review for 'The Silent House' by Orhan Pamuk

I will be very busy reading in the near future. But I am looking forward to most of these, especially to Shakespeare. I simply love Shakespeare. Maybe I should start a blog, just for Shakespeare. Ok, I think I need more sleep! So, what books did you get?