It's weird, but nice 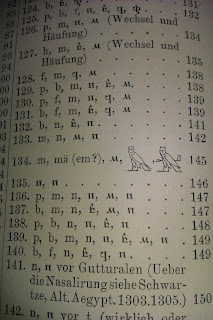 I thought I'd spotlight oneof my own old books, just as a way of forcing myself to properly catalogue it. So, this is the most expensive book I have bought. I got it from Alpeh, my favourite bookstore in the Netherlands. It is a massive introduction to the (this is my own translation of aegyptisch-semitisch-indoeuropaeisches wurzel wörterbuch) Egyptian-semitic-indoeuropean dictionary by Carl Abel. His book was orinigally published in 1884, my copy is from 2 years later. I always get excited when I see that universities have later copies of the book, don't know why.

The story of me and this book is like a tragic lovestory. For 2 years I went to this bookstore and every time I saw the plain green cover. I pulled it out and saw it was €70. The first time I put it back immediately since it's way out of my usualy price range. How much do you usually pay for books? But then, after seeing it there again and again for 2 years and looking in it every single time  I called in my birthday money from my mother and bought it.

Anyways, lets get to the important bit: the book itself. As I said before, it is a dictionary for languages. On the above-right you can see a photo of the Table of Contents. What it shows is the letter in the Latin alphabet, then in the Greek alphabet and then the equivalent in hyroglyphs. Do you think I would have bought a dictionary if it wasn't special? HYROGLYPHS!! 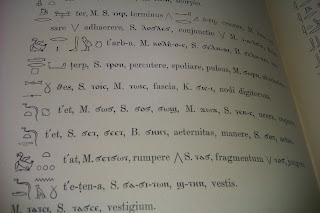 So, what has this book thought me? Hyroglyphs don't really make sense. Much like the Chinese alphabet, some signs are for words, others for letters and others for syllables.

Have you ever bought a book you can't read but still like to look at?