Today I decided to use a book by Umberto Eco for Book Beginnings, hosted by Rose City Reader, and Friday 56, hosted by Freda's Voice, but not one of his fictional works. 'Confessions of a Young Novelist' is really good so far, although a bit complex here and there. But Eco's writing style is humorous, so next to all the tips I get to laugh once in a while, which I enjoy! So, on to the memes:
Follow Friday is hosted by Alison Can Read and Parajunkee.

Q: Have you had a character that disappointed you? One that you fell in love with and then "broke up" with later on in either the series or a stand-alone book? Tell us about him or her.

Eeeeerm, that's actually a really difficult question. I don't know what to say! I can't remember ever having been really disappointed in a character. Hhmmm. A character that sent me on a rollercoast of emotions was Snape, from Harry Potter. First I thought he was scary, then I started to really appreciate his sarcasm, then I felt sorry for his because James Potter was a pest, then I hated him for killing Dumbledore and then I felt like he was the best ever literary hero I had ever read about. So, I wasn't really in love with him, he was my hero. And then my villain, and then my hero again! 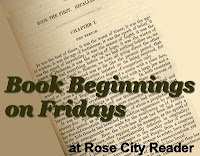 'These lectures are entitles Confessions of a Young Novelist - and one might well askw hy, since I am marching towards my seventy-sevent year. But it so happens that I published my first novel, The Name of the Rose, in 1980, which means I started my career as a novelist a mere twenty-eight years ago. Thus, I consider myself a very young anc certainly promising novelist, who has so far published only five novels and will publish many more in the next fifty years.'

I quite liked the beginning because it was quite funny but also immediately highlighted the difference between Eco and many other authors. He is over seventy and will certainly not live another fifty years, unless he plans on living until his 120th, because he already had a lifetime of working before starting to write. And the knowledge he has gathered from working at the University for so long is what makes his books so interesting!


'But Helena Costiucovich wrote something more to establish the parallels between my book and Henriot's. She said that in Henriot's novel, the coveted manuscript was the original copy of Casanova's memoirs. It so happens that in my novel there is a minor character called Hugh of Newcastle (in the Italian version, Ugo di Novocastro). Costiucovich's conclusion is that "only by passion from one name to another is it possible to conceive of the name of the rose".'

Here we have a prime example of why this book is ever so confusing at times. Eco here talks about how readers and critics sometimes interpret things that he never meant to put in his books, such as Casanova. However, in his explanation, which was too long to copy, he uses terms that can be thoroughly confusing and led me to reread the page a couple of times. But I like a challenging read, so this is actually one of my new favourite books!

So, how about you? And how awesome is that picture of Snape? Don't hesitate to leave a link in the comment, I  love visiting back!!!