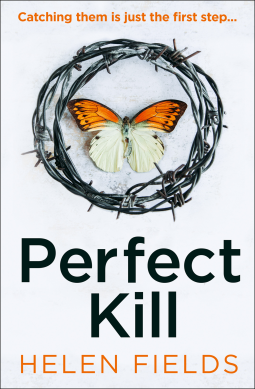 I've been following Helen Fields' D.I. Callanach series since its fourth installment, Perfect Silence. I was immediately gripped by the characters and the intense plot Fields wove. For me Perfect Crime only improved in these areas and I wondered how she would be able to top herself. Perfect Kill is, however, on a completely different level. Thanks to Avon Books UK and NetGalley for providing me with a copy of this book in exchange for an honest review.
Pub. Date: 6/2/2020
Publisher: Avon Books UK

A gripping, exciting read to absorb you from start to finish!

He had never heard himself scream before. It was terrifying.

Alone, trapped in the darkness and with no way out, Bart Campbell knows that his chances of being found alive are slim.

Drugged and kidnapped, the realisation soon dawns that he’s been locked inside a shipping container far from his Edinburgh home. But what Bart doesn’t yet know is that he’s now heading for France where his unspeakable fate is already sealed…

DCI Ava Turner and DI Luc Callanach are working on separate cases that soon collide as it becomes clear that the men and women being shipped to France are being traded for women trafficked into Scotland.

With so many lives at stake, they face an impossible task – but there’s no option of failure when Bart and so many others will soon be dead…

Get ready for a rollercoaster ride like no other, with the next gripping thriller from the number one bestselling crime author, Helen Fields. The perfect read for fans of M. J. Arlidge and Karin Slaughter.

I want to take a moment at the beginning of the review to talk about the beauty that is a well-crafted detective book series. Too often, series feel the need to ramp up the tension and action, no matter what consequences that might have for the characters. It's similar in TV shows and films. How often can you put someone through hell or have them punched in the face before they simply can't get back up? The good series don't just allow for lasting consequences of trauma, they work actively with them. Part of the reason why The Hunger Games and Divergent series were so popular was because its protagonists carried their trauma openly and had it inform their next steps. I've always found that the D.I. Callanach series similarly tries to allow trauma and stress to be a part of Ava and (especially) Luc's character arcs, supporting their growth from book to book.
Perfect Kill is a tough read. Although each of Helen Fields' D.I. Callanach installments so far have dealt with heavy and difficult topics, Perfect Kill is very much a culmination of all of them. With Ava Turner in Edinburgh and Luc Callanach in Paris, both find themselves drawn into the same case when the kidnapping of Scottish youths coincides with the arrival and trafficking of Eastern European women. The main theme of Perfect Kill, then, is exploitation and abuse. Some of this is very violent, as we're given an insight into the horror by the narration one of the trafficked women, which means Perfect Kill might not be for everyone. I found certain parts of the book tough to read but I was also very glad that Fields didn't sugarcoat anything. For those with a weak stomach, there is also a bit of a warning attached to this book, as there is some explicit talk about surgeries. On the more serial aspect of Perfect Kill, the novel focuses a lot of Ava and Natasha's friendship, as well as the fall out between Ava and Luc after the revelations at the end of Perfect Crime.
I have reached the point where Helen Fields is now at the same level as Elizabeth George. The moment I see either of their names, I know I will be reading the book it is attached to. Fields explores new depths in Perfect Kill, with characters plummeting to new depths of despair and terror. She finds the right balance between allowing for the horror, while also bringing in lighter moments as a reprieve. Many of these lighter moments come from the side characters that continue to delight me in every installment. Moving back and forth between France and Scotland allows for a bit of suspense, as the reader begins to suspect how linked the two cases really are. As always, Fields nicely ties up all the story lines towards the end of the book, except for the continuing tension between Ava and Luc. This better not be the end of the D.I. Callanach series because although I adore the tension, I would love a resolution!
I give this novel...

4 Universes!
The D.I. Callanach series is a pleasure to read and Perfect Kill is no exception. Fields delivers the thrills, the twists and turns, but also the emotional punches and character development. Get into this series as soon as you can!
Labels: 4 Universes D.I. Callanach detective Helen Fields netGalley Perfect Kill Review Suspense