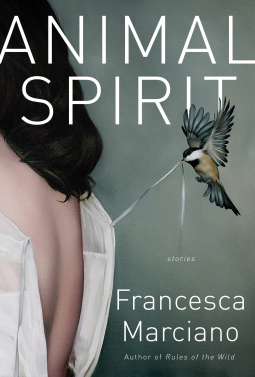 I adore short story collections, especially ones like Animal Spirit that seem bound together by specific themes. Each story builds on the next, perhaps not with the same characters, but by developing a feeling or a message, until, by the end of the collection it is almost a rallying cry. Thanks to Knopf Doubleday and NetGalley for providing me with a copy of this book in exchange for an honest review.
Pub. Date: 6/16/2020
Publisher: Knopf Doubleday Publishing Group

Centered in Rome but transporting us into worlds as varied and alluring as they are emotionally real, Francesca Marciano’s stories paint landscapes that are populated—vividly, hauntingly—by animals: from violent seagulls and starlings circling the evening sky in exhilarating formation to magical snakes and a tiny dog on the side of a deserted road. In unforgettable, cinematic frames, events unfold, especially in the lives of women. An affair ends painfully at a dinner table, an actress’s past comes crashing down on her during an audition, an unhappy wife seeks respite in a historic palazzo sublet. Two starkly different couples imagine parenthood during a Greek island holiday and a young girl returns from rehab, deciding to set out anew with a traveling circus. A man in crisis draws his ex-lover deep into the New Mexico desert. With spellbinding clarity, the six masterly stories in Animal Spirit inhabit the minds and hearts of Marciano’s characters. They chronicle deeply human moments of realization and recognition, indelible instants of irrevocable change—epiphanies sometimes sparked by our connection with animals and the primal power they show us.

In Animal Spirit Francesca Marciano shows us people in the middle of dilemmas and conflicts, while focusing strongly on animal symbolism. Short stories are a great medium to explore specific moments or emotions, but it requires a major focus on the author's part. In Animal Spirit Marciano tackles the conflicts of women, many caused by their relationships with the men around them and mistakes from their past. Her short stories feel like novels, in the sense that she builds up character wonderfully through their actions meaning that after a few pages you have become very aware of them.
The title story of Animal Spirit concerns a group of friends, made up of two couples, who go on a holiday together, where tensions slowly rise. All of this is alleviated when a little dog finds its way to them. Being able to care for something, almost selflessly, allows them to put their other worries and concerns to the side for a moment, to be better. In 'Terrible Things Could Happen to Us' Marciano shows us the end of a relationship from the perspectives of multiple people involved. Through all the perspectives the true consequences of such a fall out. In 'The Girl' a young woman, who remains nameless, escapes to the circus, before escaping once again. It's a story of someone in the search for freedom and home. In each story animal imagery comes to the fore to help highlight unspoken themes. In 'There Might Be Blood' aggressive seagulls and swooping falcons battle it out as a woman considers her marriage and life. In 'The Girl' a giant albino python is both constrictive and liberating.
Marciano's stories stuck with me for a long time after I finished Animal Spirit, in a large part because she so effortlessly creates moments that shine. A mother and her daughters, waiting at the dinner table for her boyfriend to show up. A middle-aged woman in an Italian palazzo. A girl writhed in snakes in  a circus tent. These images came across so strongly that sometimes they almost overpowered the rest of the stories. But all the stories have strong themes as well, that mostly come through by the end. I will definitely be looking out for future stories and collections by Francesca Marciano.
I give this collection...

4 Universes!
I greatly enjoyed reading Animal Spirit, which contains nicely crafted stories about conflicts and, hopefully, growth.
Posted by Juli Rahel at 7/12/2020 08:36:00 am