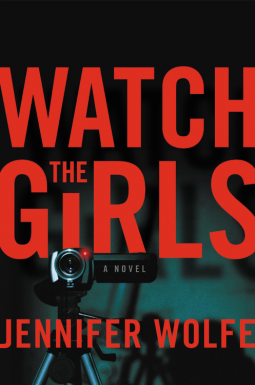 A missing sister? A former teen star? A series of disappearances? A town made famous by horror movies? How has this genius combination of thrills not been combined in a book before now?! I was fascinated by Watch the Girls’ blurb straightaway, which of course led to the concern that the actual book wouldn’t live up to my expectations. But thankfully that concern was unfounded because Wolfe delivered exactly what I wanted. Thanks to Grand Central Publishing and Netgalley for providing me with a copy of this book in exchange for an honest review.

Fame and obsession collide in this darkly twisted novel from an incredible new voice in suspense.

I've been watched all my life. I'm used to being stared at. Observed. Followed.SOMEONE IS WATCHING

Washed up teen star Liv Hendricks quit acting after her beloved younger sister inexplicably disappeared following a Hollywood party gone wrong. Liv barely escaped with her life, and her sister was never heard from again. But all this time, someone's been waiting patiently to finish what was started...

FOUR MISSING GIRLSNow fifteen years later, broke and desperate, Liv is forced to return to the spotlight. She crowdfunds a webseries in which she'll pose as a real-life private detective--a nod to the show she starred on as a teen. When a mysterious donor challenges her to investigate a series of disappearances outside a town made famous by the horror movies filmed there, Liv has no choice but to accept.

FOLLOW THE WHITE WOLFLiv is given a cryptic first clue: Follow the white wolf. And now a darker game is about to begin. Through social media, someone is leaving breadcrumbs to follow. As Liv makes increasingly disturbing discoveries, her show explodes in popularity. A rapt internet audience is eager to watch it all--perhaps even at the cost of Liv's own life...
Filled with provocative twists and turns as the line between plot and reality blurs in this inventive tour-de-force from breakout writer Jennifer Wolfe.

Where to begin? A lot goes on in Watch the Girls and it took me until around halfway through the book before I saw what it was that connected the different elements: family. I have said this before, but the idea of family is incredibly potent in literature. Whether it’s Anna Karenina or Coraline, authors have always found inspiration in family relationships. Our family is, in a large part, what shapes us but it is also something we have to depart from at some point to consider ourselves independent adults. You can never quite let it go, of course, and the smallest tensions can lead to major fallouts. But it can also be a fountain of endless love and support, inspiring books likeLittle Women and A Little Princess. In Watch the Girls, Wolfe shows the darker sides of family life: jealousy and fear, the desire to protect and the desire to destroy. In the end it made sense that this potent network of connections is what motivates much of the twists and turns in Watch the Girls.

Watch the Girls follows Liv (Olivia) Hendricks, once a teen star and now a struggling C-lister at best. She wants nothing to do with all the glitz and glam, but she needs money so after being fired from her latest set she crowdfunds a new enterprise: Liv solving mysteries! But her first mystery takes her straight back to her own past. AsWatch the Girls moves between Liv trying to solve the disappearance of young women, young Olivia relives her own trauma of losing her youngest sister and remembering nothing of the night. Wolfe plays interestingly with (social) media, letting the reader see the Tweets Liv gets while also looking at the influence of too much exposure at a young age. And then there are the horror movies that made the locale of the disappearances famous. Wolfe indirectly examines why we are obsessed with what horrifies us, if there is something we can learn from facing our worst fears, and where those fears come from. I loved how Wolfe used the image of the wolf in Watch the Girls. The wolf has always been a fascinating figure, a pack animal with strong loyalties yet also a hunter at night.

I had never read anything by Jennifer Wolfe before, but Watch the Girls has definitely made me a fan. Although there are a number of tropes in the book she manages to avoid it becoming cliché. Her writing feels honest, while also giving you exactly the thrills and scares that you want. There is some truly horrifying stuff in this book, but Wolfe avoids sensationalism. ‘Dead girls’ is a popular topic in modern fiction and it can at times be problematic (click here for a very interesting article on this topic), but Wolfe manages to move around this relatively well. In a sense the world’s obsession with dead or disappeared girls is central to this novel as well, asking us why we think it so important to watch girls suffer on camera or in fiction. What is it supposed to teach us? Who is it really for? In a sense this question is also posed to the reader. Why are we so fascinated with this story of girls and women suffering? Watch the Girls doesn’t give an answer to those questions, but I was glad that aside from being a fascinating thriller that had me on the edge of my seat it also gave me food for thought.

I give this novel..

While reading Watch the Girls it chased everything else from my mind. When I wasn’t reading it I was thinking about it. I loved trying to figure out what was happening, moving with the twists and turns and rooting for Liv to overcome everything that was thrown at her.
Posted by Juli Rahel at 7/12/2018 12:23:00 pm