Review: 'The Haunting of Hill House' by Shirley Jackson 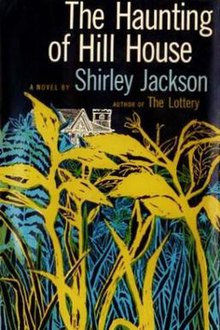 When you think of books in which literary fiction meets horror, it's hard not to think of Shirley Jackson. With her 1959 classic, The Haunting of Hill House she pretty much set the ground rules for what a supernatural thriller should look like. And yet, despite being a fan of hers, I never quite dared to give The Haunting of Hill House a try. Perhaps it was the fear that I wouldn't like it as much as her other work, that I'd be disappointed in one of my favourite authors. Thankfully those fears were all for naught as I absolutely adored this novel!

First published in 1959, Shirley Jackson's The Haunting of Hill House has been hailed as a perfect work of unnerving terror. It is the story of four seekers who arrive at a notoriously unfriendly pile called Hill House: Dr. Montague, an occult scholar looking for solid evidence of a "haunting"; Theodora, his lighthearted assistant; Eleanor, a friendless, fragile young woman well acquainted with poltergeists; and Luke, the future heir of Hill House. At first, their stay seems destined to be merely a spooky encounter with inexplicable phenomena. But Hill House is gathering its powers—and soon it will choose one of them to make its own.

God I adore Shirley Jackson! Whether it is her short stories, like 'The Lottery', or her essays and letters, like the collection Let Me Tell You, I can't put her writing down. I first experimented with her novels when I read We Have Always Lived in the Castle, giving myself a first taste of the terror Shirley could create when given more than a few pages. What has always struck me about her writing is that she seems able to penetrate into what humans fear. As Shirley's Dr. Montague says:


“Fear," the doctor said, "is the relinquishment of logic, the willing relinquishing of reasonable patterns. We yield to it or we fight it, but we cannot meet it halfway.”

Shirley brings her characters, and her readers, to that point where they give up on logic, where reason won't cut it and the brain has to accept something seemingly impossible is happening. And this doesn't have to just be ghosts. As 'The Lottery' shows, human behaviour itself can also require us to relinquish logic and patterns. I don't think I've ever seen another author capture it quite so well for me.

The Haunting of Hill House has everything one would consider necessary for a good horror read: a house 'without kindness', a Doctor who wants solid evidence of the supernatural, and three young people who follow him into the house. It's a set up that now feels almost cliche since this is how most supernatural thrillers start, books or movies, but it all came from Jackson. She crafts a tale in which both much is revealed and much left concealed. There is the hilarious banter between the house occupants as they attempt to cope with the mounting pressure of being in Hill House, but there is also the horrible banging on the doors at night. Reading The Haunting of Hill House you'll find yourself both furiously believing something is haunting the house, as well wondering which one, if not all of them, is loosing their mind.

Shirley Jackson is a great writer. She crafts an atmosphere like no other, and she brings the horrors of Hill House to life. Jackson manages to put a lot into a few words, never missing an opportunity to sow doubt and mistrust. Just look at the beginning of the novel:


“No live organism can continue for long to exist sanely under conditions of absolute reality; even larks and katydids are supposed, by some, to dream. Hill House, not sane, stood by itself against its hills, holding darkness within; it had stood so for eighty years and might stand for eighty more. Within, walls continued upright, bricks met neatly, floors were firm, and doors were sensibly shut; silence lay steadily against the wood and stone of Hill House, and whatever walked there, walked alone.”

These few sentences tell us a lot about the house at the centre of the novel. Hill House has seen perhaps too much reality, too much tragedy, and has become 'not sane' as a consequence. There are stark warnings about darkness and something walking the corridors, but also the reminder that it's a sturdy house, strong walls, solid floors. Jackson, from the beginning, sets up all the different ways you can interpret the hauntings going on, and despite giving the reader this freedom she has an intangible grip on the narrative and where it will go.

I read The Haunting of Hill House in one sitting because it's simply impossible to put this book down. Jackson created a genre with this book and she set the bar so high with this book I'm not quite sure anyone could top her haunted house. I'd recommend this to fans of Gothic Thrillers and the Supernatural.
Posted by Juli Rahel at 8/08/2017 09:12:00 am