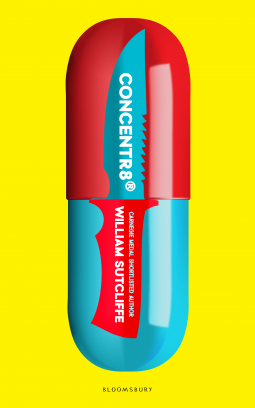 I remember when I was in primary school that something of a ADHD-craze hit the Netherlands. Across the country more and more boys, especially, were diagnosed with ADHD and medicated to control their behaviour. I also remember my parents thinking this increased diagnosing of children younger than ten wasn't a good idea. So when I saw a novel addressing this very topic, I knew I wanted to read it. And I was immensely and positively surprised by Sutcliffe's novel.


In a future London, Concentr8 is a prescription drug intended to help kids with ADD. Soon every troubled teen is on it. It makes sense, doesn’t it? Keep the undesirable elements in line. Keep people like us safe from people like them. What’s good for society is good for everyone.

Troy, Femi, Lee, Karen and Blaze have been taking Concentr8 as long as they can remember. They’re not exactly a gang, but Blaze is their leader, and Troy has always been his quiet, watchful sidekick – the only one Blaze really trusts. They’re not looking for trouble, but one hot summer day, when riots break out across the city, they find it.

What makes five kids pick a man seemingly at random – a nobody, he works in the housing department, doesn’t even have a good phone – hold a knife to his side, take him to a warehouse and chain him to a radiator? They’ve got a hostage, but don’t really know what they want, or why they’ve done it. And across the course of five tense days, with a journalist, a floppy-haired mayor, a police negotiator, and the sinister face of the pharmaceutical industry, they – and we – begin to understand why.

This is a book about how we label children. It’s about how kids get lost and failed by the system. It’s about how politicians manipulate them. Gripping and controversial reading for fans of Malorie Blackman and Patrick Ness.

One of the things I liked about Concentr8 is that it's a novel that is not just a story, but also aims to be a lesson. Not in an overly pedantic way, but in an attempt to raise awareness for a topic that is clearly close to the author's heart. The way we treat the children in our societies is crucial and yet often neglected. Whether it's the continuously growing pressure on children to succeed in standardised tests or neglecting to take their concerns seriously, it is not necessarily an easy world for children, let alone for those living in war zones. I am always happy to see fiction novels pick up such controversial yet important topics and Sutcliffe's approaches his with the seriousness it deserves. Between chapters he quotes research on ADHD and his narrative also makes it clear he did a lot of research for this book. Of course he has his own opinion on the matter, but he doesn't force it down the reader's throat.

The novel is split up into different parts, one for each day of the hostage crisis. These parts are then set up into different chapters, each narrated by a different character, either a member of Blaze's gang or another one of the relevant characters. Initially this takes some getting used to and it can be occasionally confusing, but Sutcliffe does his best to give each character a different voice and make the transitions feel relevant. Each character has their own tale to tell, their own version of events, and it is by bringing these all together that Sutcliffe is truly able to make his point. Halfway through the novel I realised I really couldn't relate to any of the characters in the book, except perhaps for the journalist, but this one realisation was followed by another. Although Literature with a capital L likes to write about "the underdog", the poor orphan in the workhouse or the immigrants searching for work during the Great Depression, they are seemingly always imbued with an innate goodness and purity that ennobles them but belies the true consequences of growing up without options, without possibilities. Sutcliffe's teenagers are perhaps not very likeable, but they are human and real. It is a credit to this book that actually none of the characters are very likeable and yet you still want to hear their stories.

Concentr8 is a mix between different genres. On the one hand it's a dystopian novel about how we treat our children in a distant future, on the other hand it is a YA novel about children growing up in a world that doesn't care for them. It's also social commentary and, to a certain extent, science fiction. This mix is quite heady and probably not for everyone. I struggled through the first few chapters as Sutcliffe attempted to capture the voice of London teenagers, occasionally writing without punctuation and using slang. But once I got into it, I found that Concentr8 really worked for me. There was an insolence in how the novel addressed readers like me: relatively well-settled in life and having never had to deal with poverty or class. It doesn't make reading Concentr8 fun, but it does make it relevant. Sutcliffe doesn't give you a clear cut answer and doesn't even attempt to end with a classic happy ending, but it will leave you with a great set of questions to consider.

Despite struggling at the beginning, I ended up being really touched by Sutcliffe's Concentr8. He gives a voice here to teenagers who aren't often heard, highlighting a problem we prefer to forget about. Although it may be a struggle, I'd recommend this to those interested in YA fiction and social commentary.
Posted by Juli Rahel at 8/01/2017 05:45:00 pm