It's my penultimate Friday at University and I'm sad! In roughly a week's time, I won't be a Fresher anymore and sadness will ensue. Although, summer is coming so that's a good thing!

Book Beginnings is hosted by Rose City Reader, Friday 56 by Freda's Voice. This week I'm using The Sun Also Rises by Ernest Hemingway because I decided I needed to read some more Hemingway.

'Robert Cohn was once middleweight boxing champion of Princeton. Do not think that I am very much impressed by that as a boxing title, but it meant a lot to Cohn.'

I have discovered a like for intrusive authors, especially if they're using it in an ironic way.It just adds a whole amount of fun to sometimes quite serious plots. So, I hope this develops into something fun!

'"What? Get up? I never get up."He climbed into bed and pulled the sheet up to his chin."Try and argue me into getting up."'

Oh god, this sounds like my kind of book. Getting up is so difficult in the morning. I would never challenge anyone to arguing me out of bed though, because I can be quite argumentative when I believe in a cause as much as I believe in sleeping!

Follow Friday is hosted by Alison Can Read and Parajunkee and this week's question looks amazing!

Q: Activity: Spine Poetry. Create a line of poetry with your book spines (take a picture). Not feeling creative? Tell us about your favorite poem.

Although I never feel very creative, I decided to give this a try. I am just going to pretend it is modern poetry with a very deep hidden meaning that will reveal itself at some point. I have taken the liberty to add some basic words such as 'in' and 'a', (I put the titles in bold) since they're hardly found in (my) book spines! 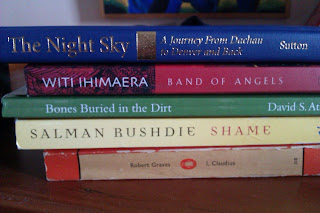 'In The Night Sky
A Band of Angels,
Bones Buried in the Dirt,
A Shame,
I, Claudius'

So, what's your poem? Managed to put something together that actually makes sense? Leave a link to your post in the comment or tell me there :)
Labels: Book Beginnings Ernest Hemingway Follow Friday Friday 56 Friday Meme Poetry The Sun Also Rises