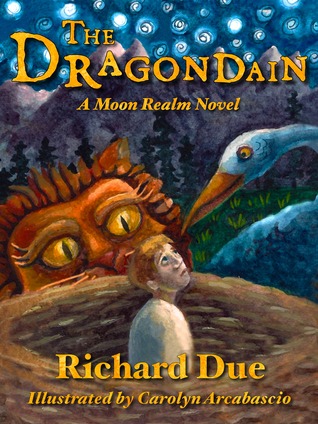 The sequel to 'The Moon Coin' by Richard Due has launched early today and I am very excited. I loved the first one (here's my review) and the second promises to be just as good! Here's the Amazon summary:

It's the middle of the night, you need to send your brother to the Moon Realm, and he won’t wake up. So you improvise. . . .

When a confused Jasper awakes, he's convinced he's dreaming. But by the time he meets Greydor, Jasper understands that this is no dream. In fact, persuading the King of the Rinn to work with the men of Dain to defeat their common enemy is a nightmare. Then there’s the other side of the coin: convincing Tavin and Dubb that saddling a Rinn isn’t certain death. (“It’ll be fun!”) And perhaps even a greater worry: can he make friends with Dubb’s daughter Darce before she punches his lights out?

Lily has problems, too. There’s a little mousie scratching in her closet. Or at least, it sounds like a little mousie. Oh, and her second confrontation with Curse, and trying to form her first peerin. (Don’t you have to be from Dain to do that?) And where’s Ebb?
Only one thing is certain. Now that Lily and Jasper have entered the Moon Realm, nothing can ever be the same again.

The official launch page is over here: The Moon Realm. Hop over there too for a preview of two chapters! And of course, there are more beautiful drawings by Carolyn Arcabascio. Doesn't this sound like a great book?

Some more praise for 'The Moon Coin':

“The Moon Coin is a beautifully written fantasy novel, perfect for middle graders to pore over themselves or as a bedtime story for younger kids. The descriptions of everything, from Uncle Ebb’s electronic fish-bird hybrids to the fanciful creatures Lily meets in the Moon Realm, are so rich that the action instantly comes alive for the reader. The story’s tension builds slowly but the excitement is constant, with Lily asking the same questions puzzling the reader. The Moon Coin has all the elements of a great fantasy: a unique, complex world, a battle between good and evil, and creatures that are a mix of comical and terrifying.” — ForeWord Reviews

"So begins a beautifully descriptive, cleverly written, intricate story, full of adventure and captivating characters, who draw you into their very lives and worlds. The wider adult reading population will no doubt be entranced by the skill of the author, Richard Due. I just cannot believe that this maturity and skill with the written word comes from a debut author.” —Fiction Books