Edgar Allan Poe's birthday is on the 19th and today we are starting the Poe-Week with a review of 'The Tell-Tale Heart'. I will not be rating these stories. 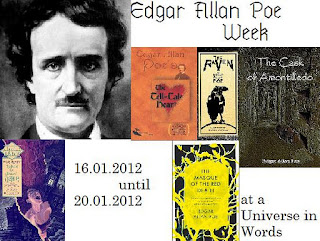 So, let's get to the review. In this short story the narrator, most likely a man, tries to convince the reader of his sanity. He goes into detail, describing exactly how he killed an old man that lived with him. As he says:

One of his eyes resembled that of a vulture—a pale blue eye, with a film over it. Whenever it fellupon me, my blood ran cold; and so by degrees—very gradually—I made up my mind to take the life of the old man,and thus rid myself of the eye forever.


I really enjoyed this story, as much as you can enjoy a story about a psychopath. Our unnamed man is looking back on the murder and on his own cleverness in covering the crime up (by disassembling the man) when he is visited by police officers. I won't tell what happens afterwards because ruining the plot would be awful. Throughout the 10 pages you really start feeling the narrator's insanity.

The introduction in itself is brilliant. Immediately you can guess something is off and that the narrator isn't half as sane as he believes.


I heard many things in hell. How, then, am I mad? Hearken! and observe how healthily--how calmly I can tell you the whole story.

There have been a lot of guesses as to what the relationship between the narrator and the old man was, since it is never explained. However, looking at Edgar's relationship's with his father, who abandoned his family when he was 1, and his strange relationship with his "adoptive" father who was on the one hand spoiling him and on the other almost aggressive in his discipline. Perhaps Edgar always felt the two looking over him and perhaps hindering him, which led him to writing this.

So, have you read 'The Tell-Tale Heart'? And don't forget, tomorrow I will review 'The Fall of the House of Usher'.