Review: 'Do Her No Harm' by Naomi Joy 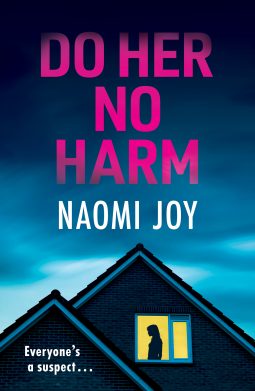 What do you do when your best friend is gone and no one, but you, is wiling to dig any deeper? Naomi Joy takes us on a roller coaster ride in Do Her No Harm that leaves the reader questioning every step the characters take. Although not every twist hit its target for me, I did find myself racing through the book. Thanks to Aria and NetGalley for providing me with a copy of this book in exchange for an honest review.

One unsolved murder. A best friend determined to right the wrongs of the past.

On the 21st August Tabitha Rice disappeared without a trace. All the signs point to murder, but no signs point to a murderer. The easiest answer is her husband, Rick. But he protests his innocence and there is little proof he is the murderer.

Annabella knows there is more to the story than what the police are telling. Tabitha was her best friend and she vows to uncover the truth.

As Annabella delves further into the past, she uncovers sides to Tabitha that she never saw coming, and she finds herself asking the question... Was this murder? Or is there more to Tabitha Rice's story than meets the eye?

Perfect for fans of Louise Candlish, The Silent Patient and Blood Orange.

Tabby disappeared five years ago and Annabella still can't let it go. Tabby's husband has moved on. The news media has move don. But Annabella knows there is more to all of this and she is determined to find out, no matter what the costs. I think the latter is one of the key themes of not just Do Her No Harm, but many suspense novels. Humans are often willing to go to the very end in their search for truth. Many of us absolutely will follow a strange noise up into the attic, because we need to know what's there. The brain is such a miraculous thing that anything it images is most likely worse than reality. Thus, Annabella finds herself grasping for straws, trusting a lousy private detective and partnering up with a journalist turned True Crime podcaster. But when do you stop? And will you recognize yourself once you have found the truth?

Annabella's private detective has failed her. He has found no proof Tabby was murdered and doesn't want to keep digging. Desperate, Annabella agrees to work with a True Crime podcaster who wants to shine a spotlight on Tabby's disappearance. The prime suspect is her husband, Rick, who has moved on and always seemed suspiciously calm. As the hunt for the truth brings her to the brink of distraction, Annabella finds herself making mistakes left, right and centre. Who can she trust? Did she know Tabby at all? And does she know herself? Not all of these questions are entirely answered to my satisfaction. There are a few quite shocking twists and turns in the final third of Do Her No Harm but a thriller aficionado will see quite a few coming. Overall I found Do Her No Harm very exciting while reading it, but once it was finished I realized it hadn't left much of an impression on me. I think part of this was due to not connecting well with the main characters which means that I wasn't truly invested in the resolution.

This is my first novel by Naomi Joy, although I know many people enjoyed her previous novel The Liars. Do Her No Harm is split up between Annabella's narrative in the present and Tabby's narrative leading up to her disappearance. As both edge their way towards the end, the tension in the novel ramps up enormously, making for an exciting second half. The first half of the novel is a bit slower, as Joy tries to put all her pieces in the right place. Sadly, Annabella wasn't fully realized for me as a character. Throughout Do Her No Harm she made some choices which seemed  very odd and unnatural. I think part of this was forced by the plot and the twists and turns Joy had coming up, but it was a shame to not be able to connect with her the way you'd hope. Rick remained a shadowy character for much of it as well, as did many of the other side characters. A slight warning comes with the book in regards to one of the main characters having OCD. It's not a major point but is a key part of her characterization and comes up frequently. Aside from that, Tabby and Annabella both worked at a beautician's and there's frequent mention of plastic surgery. Although I don't have an issue with it, I found some of the descriptions regarding it in this book almost unpleasant.

Do Her No Harm is a fun read that will keep you engaged for as long as the pages last. While some of it may be predictable to tried and tested Thriller readers, there is much to enjoy. I will keep an eye out for any future books by Naomi Joy.