Review: 'What Lies Between Us' by John Marrs 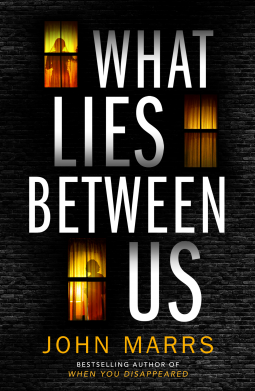 I have been using psychological thrillers to sidestep some of the stress of the everyday. Although we're back to working (almost) like normal here in Shanghai, there is still a bit of tension that makes everything harder. Thanks to Amazon Publishing UK and NetGalley for providing me with a copy of this book in exchange for an honest review.
Pub. Date: 5/15/2020
Publisher: Amazon Publishing UK

Nina can never forgive Maggie for what she did. And she can never let her leave.

They say every house has its secrets, and the house that Maggie and Nina have shared for so long is no different. Except that these secrets are not buried in the past.

Every other night, Maggie and Nina have dinner together. When they are finished, Nina helps Maggie back to her room in the attic, and into the heavy chain that keeps her there. Because Maggie has done things to Nina that can’t ever be forgiven, and now she is paying the price.

But there are many things about the past that Nina doesn’t know, and Maggie is going to keep it that way—even if it kills her.

Because in this house, the truth is more dangerous than lies.

Psychological thrillers are a great escape for me and many others as it releases some of the tensions and stress of everyday life. It's almost as if facing your worst fears on the page, whether it is being kidnapped, a high-speed car chase, a knife-wielding maniac or treacherous spouses, makes real life just a little bit less tense. How hard can it be to call the dentist if your main character is trying to solve a murder? Occasionally the high does wear off and you have to go more and more extreme in your thrillers to get some of the relief. What Lies Between Us was one of those books for me, which turned the dial up all the way. And although the shock aspect of it did the job, I realized, my need for a stronger dose of realism in my thrillers.
Twisted, that is the word most applicable to What Lies Between Us. Nina has her mother, Maggie, chained up in the attic but it is not quite clear from the beginning how the two women got to this point. As the book unfolds, history unravels and their relationship is laid bare. Marrs stacks horror and betrayal upon horror and betrayal. Much of What Lies Between Us is fascinating and gripping, but that is mostly due to its shock factor. Occasionally I found myself becoming slightly numb to all the twists and turns, the hurt the two women were causing and had caused each other. Above I mentioned my need for realism in thrillers, by which I mean a sense of consequences, the awareness that the outside world is there and is watching, that people do notice things. Novels like What Lies Between Us seem to take place in their own little universe where unspeakable acts can be committed without anyone being the wiser.
John Marrs' writing keeps you on the edge of your seat. You just know that behind every corner something horrible is waiting. What Lies Between Us is a dark novel in which there truly isn't a moment of light. Hardly anyone has any good in them and Nina and Maggie are twisted beyond belief in their relationship. They're co-dependent, they hate each other, they think they love each other and the whole thing is quite discouraging. I'm also not the biggest fan of the portrayal of mental illness in this book as it deals with quite a few damaging tropes. Most likely I will pick up other books by John Marrs, but I will also be more likely to give up on them if they prove to be in a similar vein.
I give this book...

3 Universes!
I'm giving What Lies Between Us 3 Universes because it did keep me engaged. But this isn't a book  would easily recommend. For me, it wasn't as smart or as thrilling as I'd have liked it to be. What Lies Between Us will horrify and shock, but that is all.
Posted by Juli Rahel at 8/01/2020 03:29:00 am