Review: 'The Doll-Master and Other Tales of Terror' by Joyce Carol Oates 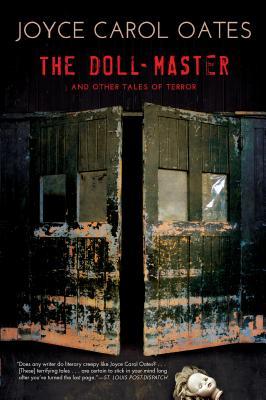 I have been wanting to read something by Joyce Carol Oates for ages. She has always been at the top of my list when it comes to wanting to read dark fiction, the kind of fiction that twists you up a little bit. So when I saw there was a new collection coming out featuring six of her stories, I knew the time had come. Thanks to Grove Atlantic and Netgalley for providing me with a copy of this book in exchange for an honest review.


From one of our most important contemporary writers, The Doll-Master and Other Tales of Terror is a bold, haunting collection of six stories.

In the title story, a young boy becomes obsessed with his cousin’s doll after she tragically passes away from leukemia. As he grows older, he begins to collect “found dolls” from the surrounding neighborhoods and stores his treasures in the abandoned carriage house on his family's estate. But just what kind of dolls are they? In “Gun Accident,” a teenage girl is thrilled when her favorite teacher asks her to house-sit, even on short notice. But when an intruder forces his way into the house while the girl is there, the fate of more than one life is changed forever. In “Equatorial,” set in the exotic Galapagos, an affluent American wife experiences disorienting assaults upon her sense of who her charismatic husband really is, and what his plans may be for her.

In The Doll-Master and Other Tales of Terror, Joyce Carol Oates evokes the “fascination of the abomination” that is at the core of the most profound, the most unsettling, and the most memorable of dark mystery fiction.

I had mixed feelings about this collection. On the one hand The Doll-Master and Other Tales of Terror are exquisitely written, but on the other hand there was a lack of terror for me. Technically the difference between terror and horror is that terror is that feeling of anticipation and fear before something terrifying happens, whereas horror focuses on the feelings during and after the terrifying event. In that sense, Oates' stories do fit into the terror genre because all of them build up beautifully to a moment and then abruptly leave us before anything truly happens. But to me The Doll-Master and Other Tales of Terror felt much more like suspense stories, the focus being not so much on the horrifying events we were anticipating, but rather on the characters themselves, on how twisted and messed up human beings can be, how we lie to ourselves and others. In a way each story could be its own psychological thriller, exploring the dark recesses of the human mind. So the mixed feeling I ended up with was one related to the title, mostly, rather than to the stories behind the cover

'The Doll-Master' is a story of loss, which slowly but surely turns into something else. A young boy loses his cousin and steals her doll to feel closer to her. When this doll is taken away by a strict father, however, he begins collecting lost dolls. But not all is what it seems. In 'Soldier' Oates puts the reader into the mind of a man accused of killing a black teen in cold blood. It is a very uncomfortable place to be and Oates builds the tension very well as to whether he's a "hero" or a villain. In 'Gun Accident', perhaps one of my favourite stories from the collection, we see a young woman remembering a past trauma. It is an incredibly real-feeling story, which is perhaps why it is so effective. 'Equatorial' is an interesting story in which a wife becomes more and more concerned her husband is planning to kill her. Oates excels at making her an unreliable narrator, though, so the reader is constantly in doubt as to what is actually happening. 'Big Momma' is perhaps the most straight-forward horror story of the collection, with something big and dangerous lurking in the dark. A young and lonely girl is taken in by a classmate's family and finally given all the attention and love she so craves. But not all is as it seems. Finally, 'Mystery, Inc.' is the most literary and meta of the stories, a crime story within a crime story, as well as an ode to all the mystery and crime writers that have come before. It doesn't entirely fit into the collection, but I think I'm not the only one who loved it.

Oates is a great writer. All of her characters are dissected so carefully and laid bare so completely, despite the brevity of the short stories, that the reader truly get into their mind. It is here that the real power of The Doll-Master and Other Tales of Terror lies and it is also why I was slightly disappointed. These stories aren't necessarily terror but rather beautiful suspense. Oates creates these fascinating characters and immersive atmospheres in which the reader is constantly swinging from one opinion to the other. Who can be trusted? Who is telling the truth? What will happen once the story ends? The stories flow so easily and are so beautiful in their own way that I truly wanted to read way more. By calling this a collection of 'Tales of Terror' I feel Oates was done wrong because it is selling the wrong aspect of her work. Not every terror tale needs gore and death, but that is what most readers will want and expect from a terror-collection. Think of these tales as psychological suspense tales and you'll be more than satisfied.


I give this collection...

I loved Oates' writing and will definitely be reading more of her work. The stories in The Doll-Master and Other Tales of Terror are fascinating, if not necessarily terrifying the way you might be expecting, and they will definitely stay with you after you finish them. The rating is largely relating to the disappointment over the title and the expectations it caused.
Posted by Juli Rahel at 9/20/2017 06:44:00 am