Review: 'The War of the Worlds' by H.G. Wells 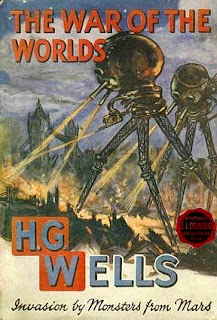 When I think of my childhood, it is a vibrant mix between Star Wars, Harry Potter, classical music and Jeff Wayne's adaptation of 'The War of the Worlds'. Nothing was ever as scary and thrilling as the Martians' 'Ulla'. Once I actually understood the words in the songs, I discovered that there was also a novel and immediately read it. That was a couple of years ago but now it has been brought back to my attention thanks to University and I have once again been sucked in by the amazing story. The Goodread's synopsis was terrible, so I've decided to use one from Amazon.

"The War of the Worlds" is a first-person narrative of an unnamed protagonist's adventures in London and the countryside southwest of London as Earth is invaded by Martians. Written in 1895-1897, it is one of the earliest stories that details a conflict between mankind and an alien race. The plot has been related to invasion literature of the time. The novel has been variously interpreted as a commentary on evolutionary theory, British imperialism, and on Victorian fears and prejudices. "The War of the Worlds" has been both popular (it has never gone out of print) and influential, spawning half a dozen feature films, radio dramas, various comic book adaptations, a television series, and sequels or parallel stories by other authors.

Before taking a look at the narrative and style of the novel, it is interesting to look at the ideas behind the novel and its foundation in the imperialistic culture Wells lived in. Wells was not the first or only one to write about alien words at the end of the Victorian age. Crucial to the development of this new sci-fi genre was Darwin's theory of evolution, interestingly enough. The idea that humans have evolved from ape-like animals, i.e. were once less developed, also opened up the possibility that the Victorians were not the height of modernity but might only be a lesser step on the stairway to perfection. Rather than invent silly aliens, Wells created a highly superior species that has no interest in communicating with humanity and that is where the true terror of the book lies. The Martians have only one goal, which is profiting from the Earth's resources, not establish contact. In many ways, Wells here echoes the Imperial sentiments of his time but presents them in a negative light. Although the Martians operate with cold intellect, at least their intention is not to maliciously harm humans. The suggestion is made that European colonizers were out to subject other people, not just countries, and rule over them. However, taking Wells' critical stance into account, he is unable to completely write off the possible advantages of an Empire. Being invaded by a superior species has brought new technology to the humans and has thereby improved their lives.

I personally love the way in which The War of the Worlds is written. As the synopsis states, the story is told by an unnamed narrator. Although we know where he lives, what his profession is and that he has a brother in London, he is not a set character. As such, even the details of his life become stereotypical enough for him to be a template for any kind of reader to empathize with. As we travel through invaded England with him, the terror of the invasion comes a lot closer to the reader because, unlike in many modern alien movies for example, the reader has no contact to the outside world, does not know who survived and who died. This adds a sense of realism which might otherwise have been completely lost in a novel starring creatures from outer space. Although criticism on Wells often highlights the repetitive nature of his characters, he clearly knows this character and it allows him to mix his interest in science and human nature into one narrative.


The War of the Worlds had a lasting impact on popular culture. Aliens have been a constant presence in the cinemas and in science fiction, but not often do the new interpretations manage to live up to the original stories. The Jeff Wayne radioplay is one of the best adaptations around, fastly superior to the 2005 movie adaptation with Tom Cruise. Keeping the setting but changing the main character to a Journalist and introducing new female characters to balance out the otherwise completely male cast, Wayne and co brought the story into the 20th century while adding some great music. I highly recommend reading the lyrics to the songs, especially 'Thunderchild', 'Brave New World' and 'The Spirit of Man'. Naming one of the songs 'Brave New World' was a nice nod, considering Wells had been thought by Thomas Huxley, who was not only a big Darwin supporter but also the grand-father of Aldous Huxley, the author of the famous novel 'Brave New World'.

The War of the World is the novel in which fiction and science truly mixed for the first time. Wells creates a true horror story while still managing to give the reader an insight into human character. Besides that, some of his comic talent still occasionally shines through, making it an overall truly enjoyable read and deserved classic.