Review: 'The Fountainhead' by Ayn Rand 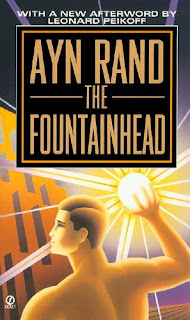 I recently read 'The Fountainhead' but haven't been able to review it until now, simply because I couldn't phrase my thoughts properly. Now I'll attempt it.


When The Fountainhead was first published, Ayn Rand's daringly original literary vision and her groundbreaking philosophy, Objectivism, won immediate worldwide interest and acclaim. This instant classic is the story of an intransigent young architect, his violent battle against conventional standards, and his explosive love affair with a beautiful woman who struggles to defeat him.


I disagree quite strongly with the synopsis above. Whereas I do agree the character of Howard Roark is intransigent, meaning he refuses to change his opinions, I don't think he fights a violent battle. Roark is utterly convinced of his own principles and lives his life through them. Whereas the other characters and society fight violently against him and his ideas, he lets them be. What makes him such a special character, to me and other readers, is how he lives his life completely convinced of these principles, the way Rand expresses them in her other novel Atlas Shrugged.


My philosophy, in essence, is the concept of man as a heroic being, with his own happiness as the moral purpose of his life, with productive achievement as his noblest activity, and reason as his only absolute.

Roark believes man is heroic and that art, in his case architecture, can lead humans to achieve productivity. Humans were meant to create, in Rand's philosophy, not copy what came before. That is the beautiful message of this book that has not let me go yet: each man and woman has the chance to create and touch sublimity.

Another point I disagree on with Goodread's synopsis, is the idea that Dominique wants to defeat Roark. Whereas initially there is a desire in her to bring Roark down, this is a part of her respect for him. Dominique wants to test Roark, wants to see how far she can push his principles and how long he will hold out. What the beauty of their relationship is, however, is that in testing each other they are testing themselves. Dominiqie pushes him to his limits because she is being tested and made stronger by suffering with and for him. By seeing him "suffer" under society's rejection, she learns to live for herself and her own happiness rather than according to other people's standards. I truly loved their relationship, the dedication to each other and the place art and understanding of beauty had. The character of Dominique is there for the reader as a guide through Rand's philosophy. Whereas Roark and his ideas might seem foreign at the beginning, his plea during his last trial strikes incredibly true. Below is perhaps one of my favourite description of Dominique:


'She stood at the rail,while the city diminished, and she felt the motion of growing distance as a growing tightness within her, the pull of a living cord that could not be stretched too far.' p. 267 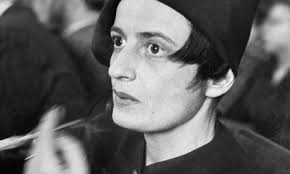 Rand's writing has often been criticized of being too political for a novel. I haven't read any of her other novels yet, but I believe that that's not true for 'The Fountainhead'. Yes, there is politics in this novel. Politics, after all, provides our life with directions. Our decisions of how to treat others, how to approach decision making, all of these are influenced by our politics. The characters in Rand's novel act and their actions are based on their personal politics, whether they belief in Capitalism, Objectivism or, perhaps, only in themselves. Rand said of this novel that the primary theme was 'individualism versus collectivism, not in politics but within a man's soul.'Although this could be read as Rand not wanting any politics in her novel, I understand it as Rand arguing that what we call "politics" is simply our understanding of our own motives, wrapped up in fancy terms with a capital letter.

If you enjoyed 'Pillars of the Earth' I think you might enjoy this novel as well. Both use architecture as a way of building their narrative. Whereas Follett uses cathedrals, Rand uses an equally religious symbol: skycrapers.

I truly loved this novel. According to some critics, this novel is better read when young because with age, apparently, the flaws in Rand's philosophy become more obvious. I can't say whether that's true or not, but for now I can just say that I have not been so in love with a book in a very long time. Its 600 pages flew by and I was truly sad when it finished it. I definitely recommend it to anyone who isn't scared of many pages and an imposing legacy.
Posted by Juli Rahel at 5/16/2013 02:53:00 pm