Sorry for bringing Rebecca Black back to the forefront of your mind. I feel like I've severely lowered the tone of my blog, but to make up for it, here are some amazing memes! First up is Book Blogger Hop, hosted by Billy over at Ramblings of a Coffee Addicted Writer. This week's question, submitted by Elizabeth, is:

I usually write my post the day off or the night before. Somehow scheduling never works out quite well for me, with posts either not posting or doing so at the wrong times. I quite like waking up on Fridays knowing I've got some "work" waiting for me. I also feel that if I answer the question now, I'll be more curious as to what other people have answered. The amount of times I've felt the urge to change my answer after seeing everyone elses, because everyone always makes such good points, is countless.

Follow Friday is hosted by Alison Can Read and Parajunkee and this week's question is adorable:

Have any pets? Tell us or show us.

I personally don't have a pet anymore, my guinea pig died years ago and none of the landlords like it when students come in with pets. But my Dad's girlfriend has a dog that we doggysit quite a lot and he is practically our pet as well. It took me about 20 minutes to find the picture below because I just couldn't pick one I liked best. 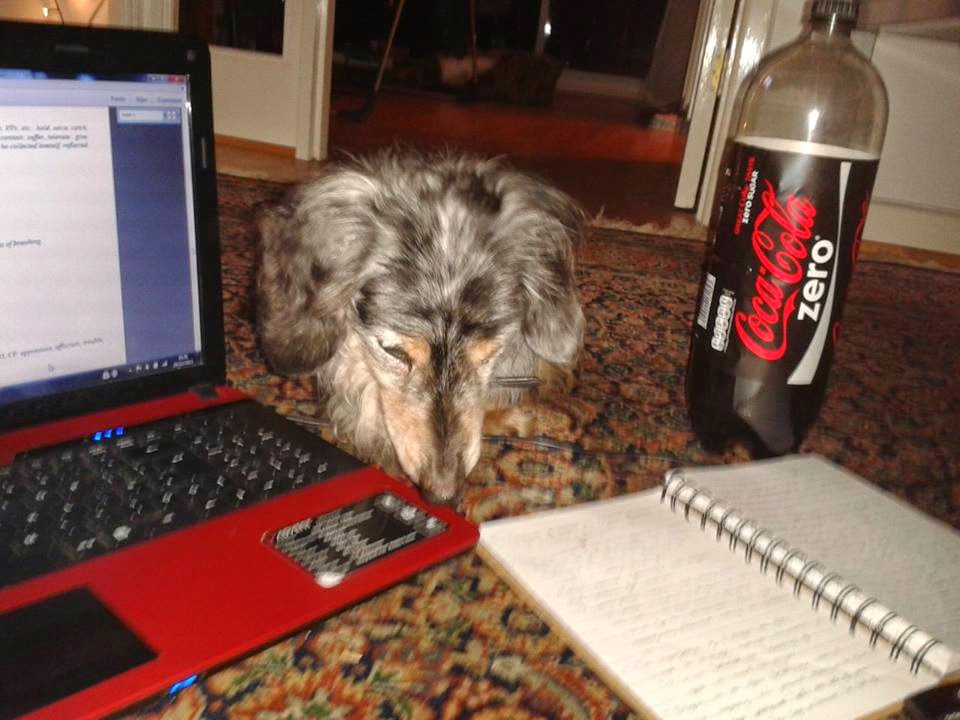 Don't judge me for the gratuitous picture of my Zero Coke bottle. I wouldn't be up and running if I didn't have that. Anyway, this is Cooper, he is incredibly old by now and rather blind and deaf, which means that when you pet him he thinks the hands of God have descended upon him and he just looks up at the ceiling rather than you. He also walks into things, which is hilarious. This picture was taken about two years ago when he was a bit more sprightly. At that point, he preferred to interrupt me at doing any kind of work. He is absolutely adorable.

Book Beginnings and Firday 56 are hosted by Gillion over at Rose City Reader and Freda at Freda's Voice respectively. This week I'm using only one book for these memes and that book is The Time Machine by H.G Wells. I love The War of the Worlds, so I decided to slowly but surely make my way through his other Sci-Fi stories.

'The Time Traveller (for so it will be convenient to speak of him) was expounding a recondite matter to us. His grey eyes shone and twinkled, and his usually pale face was flushed and animated. The fire burned brightly, and the soft radiance of the incandescent lights in the lilies of silver caught the bubbles that flashed ad passed in our glasses.' p.1

I love Wells' description here. It is just so beautiful. The fire he refers to is of course not just the one burning in the hearth but also the one in the Time Traveller. Wells' describes his excitement really naturally without making it plain and obvious.


'Above me towered the sphinx, upon the bronze pedestal, white, shining, leprous, in the light of the rising moon. It seemed to smile in mockery of my dismay.' p.56

Being mocked by a giant statue, I wonder where our Time Traveller got himself lost. And especially, in what time!

So, how do you write your Friday posts? And do you have a pet that constantly, adorably distracts you from doing anything productive/
Labels: blogging Book Beginnings Book Blogger Hop Follow Friday Friday 56 Friday Meme H.G. Wells pets scheduling The Time Machine