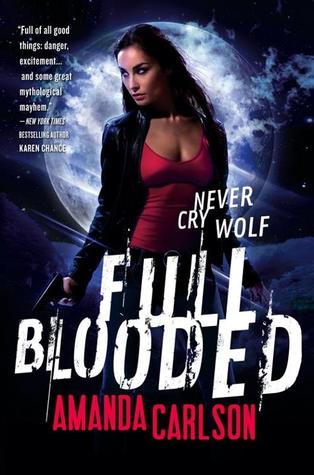 It's another Tuesday, which means it's time we show each other how amazing our current reads are! I'm so ready to get jealous over everyone else's books! Tuesday Intros is hosted by Diane over at Bibliophile by the Sea, while Teaser Tuesdays is hosted by MizB over at Should Be Reading. This week I'm using Full Blooded by Amanda Carlson, the first in a series. I got this book, and met the lovely Amanda, at Orbit's Urban Fantasy Evening. I don't know whether I would've picked it up on my own so I'm really glad to have gotten a copy because so far I'm enjoying it!


Born the only female in an all male race, Jessica McClain isn’t just different—she’s feared.

After living under the radar for the last twenty-six years, Jessica is thrust unexpectedly into her first change, a full ten years late. She wakes up and finds she’s in the middle of a storm. Now that she’s become the only female full-blooded werewolf in town, the supernatural world is already clamoring to take a bite out of her and her new Pack must rise up and protect her.

But not everyone is on board. The werewolf Rights of Laws is missing text and the superstitious werewolves think that Jessica means an end to their race. It doesn’t help when Jessica begins to realize she’s more. She can change partway and hold her form, and speak directly to her wolf. But the biggest complication by far is that her alpha father can't control her like he can the rest of his wolves.

When a mercenary who’s been hired by the vampires shows up to extract information about the newly turned werewolf only days after her change, they find themselves smack in the middle of a war and there's no choice but to run together. When it’s up to Jessica to negotiate her release against her father’s direct orders, she chooses to take an offer for help instead. In exchange, Jessica must now swear an oath she may end up repaying with her life.


'I drew in a ragged breath and tried hard to surface from one hell of a nightmare. "Jesus", I moaned. Sweat slid down my face. My head was fuzzy. Was I dreaming? If I was, this dream hurt like a bitch.Wait, dreams aren't supposed to hurt.Without warning my body seized again. Pain scorched through my veins like a bad sun burn, igniting every cell in its path. I clenched my teeth, trying hard to block the rush.Then, as quickly as it struck, the pain disappeared.' p.1

Wonder what the pain is about? Trust me when I say it gets worse, and then it gets awesome!


'He'd make his move tonight. There was little doubt.The thought of permanently wiping that smirk off his face sent a sweet rush of adrenaline racing through y veins, much stronger than it had been earlier today.Prey.' p.85

You have to love strong, empowered women in fiction. They're amazing.

So, those are my intros and teasers for today. Despite not being my usual read, I'm finding it a very fun read!
Labels: Amanda Carlson Full Blooded Teaser Tuesday Tuesday Intros