Review: 'Mercy and Other Stories' by Rebecca Lloyd 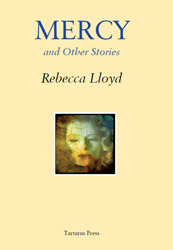 I got sent this story collection for review and since I've been on such a collection wave, it fits right in. Having just finished Angela Carter's Burning Your Boats, I feared I might be disappointed in this collection. Thankfully, I found myself loving every single story.


Rebecca Lloyd’s first published collection of six­teen strange stories, nine of which are previously unpublished, is made up of tales of unease with a sprinkling of the ghostly, menacing and fantastical. The stories inhabit the fragile space between fantasy and reality, where the landscape is in constant flux and things are not quite as they seem.

In ‘Mercy’ a loving husband finds an un­usual method of prolonging his affec­tion for his wife, while the inhabitant of a halfway house finds a creative use for internet dating in ‘Salsa’. Alan runs away from the circus in ‘The Lover’, and in ‘The Reunion’, eccentric and elderly Isobel and Charles, struggling with the upkeep of their de­caying mans­ion, chose an entirely new way to face the future. In ‘Maynard’s Moun­tain’, the search for a lost lottery ticket involves a traveller family in a (literally) uphill task.

A lot of short story writers seem to hover between numerous different styles and genres, writing one love story before turning to some James Joyce-esque stream-of-consciousness. It leads to literary whiplash, which is why I was really glad to see an author who dedicates herself to a genre and then excels in it. Lloyd indeed does write 'strange stories', which seem to move effortlessly across national and social borders. Whether we're talking about farmers or socialites, Lloyd manages to give them all a voice and a story which I loved reading. Her writing style is easy, in the best sense of the word. It is easy to follow, easy to lose yourself in and easy to believe. Both description and dialogue fit in each story, may the protagonist be male or female.

I'm usually not very big on paranormal stories or ghost stories, but I really enjoyed how Lloyd manages to infuse a sense of 'strangeness' into her stories that can be interpreted either way. Are these characters driving themselves crazy or is there really something there? Lloyd plays with a lot of elements from folk tales or myths and legends while creating a very realistic setting. Her characters are very normal, rational human beings, which is a delight to read. It can be really tiring to read the same angst-y internal monologue over and over again, so to be given sixteen stories filled with interesting people is delightful. A major bonus is also that Lloyd knows how to end a story. Rather than taper off towards the end or move towards a conventional end, she continues down her own path.

Although I enjoyed all sixteen stories, I naturally had some favourites. 'Lucky Cat' was a really tragic story with some great twists. I loved the main character of 'Gone to the Deep' and the descriptions in that story were beautiful as well. 'All That Follows' may have been my favourite because it seemed very real, despite still having the eerie quality of the collection.

At times I found it hard to differentiate between this collection and Angela Carter's, and that is a compliment. Although Carter seems to aggressively push boundaries effortlessly in every single story, Lloyd's stories are much subtler, making you question things rather than agreeing with Lloyd automatically. I definitely recommend it to people who want to find out exactly what 'strange' means and who aren't afraid of suspending disbelief for a while.
Labels: 4 Universes Collections Mercy and Other Stories Rebecca Lloyd Review Short Stories Strange Stories